This is a gross profit story. I'm going to work backwards from the notional bear case to the opportunity. If you don't know Texhong, this write up is a good place to start.

Texhong's competitive advantage and earning power are presumed to rest in large part on the difference between international cotton prices (for which "Cotlook A" is a proxy) and domestic Chinese cotton prices ("CC 328"). That spread is narrowing and the market's view -- as reflected in the share price, articulated nowhere -- is that Texhong's earnings and competitiveness will therefore be eviscerated.

One can see the notional bear case illustrated as follows:
The spread has widened...

Note: Texhong holds 90 to 100 days of inventory so I have offset the cotton prices above in order to better match cotton prices/costs to Texhong's reporting periods.

and therefore earnings have quintupled on a mere doubling of total capacity...


I am taking the other side of the argument. I doubt gross margins can fall to anywhere near the level implied by the current market cap and I think they will be higher in 2015 and beyond than they were in 2013. 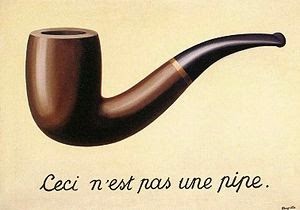 If one assumes that all of the Vietnam capacity is used to produce cotton yarns that are then sold in PRC -- i.e. that the company has taken maximum possible advantage of the cotton price differential -- everything else falls into place.

This is what we can surmise/conclude about Texhong's cost structure: 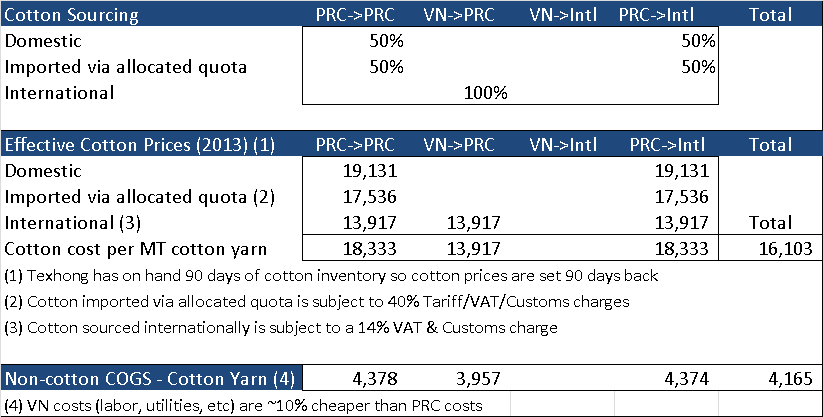 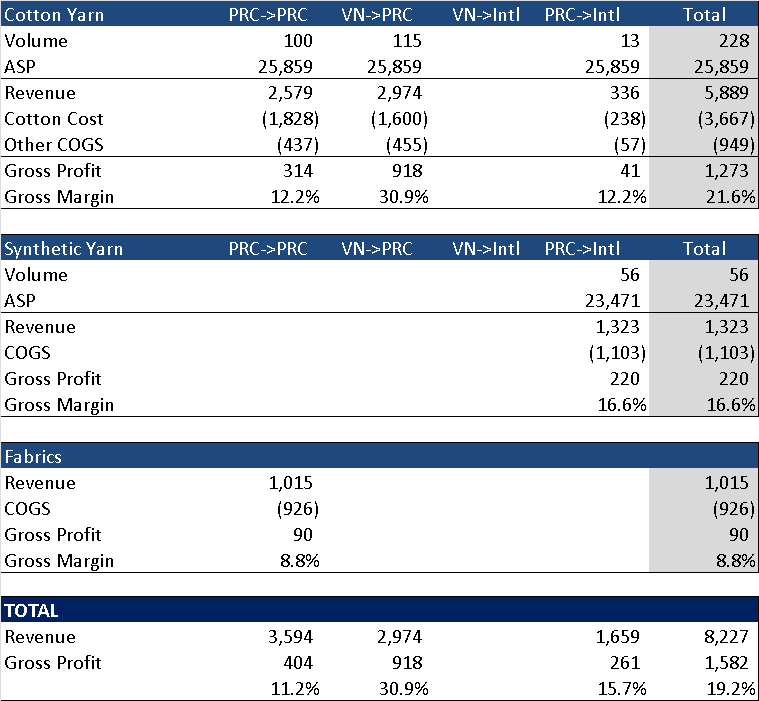 That's the base. I'll emphasize here that there are thousands of grades of cotton and thousands of varieties of cotton yarn, each with their own costs and prices: "Cotlook A", "CC 328", and "ASP" are averages and approximations.

As a reality check, one could go back to 2007 when Vietnam was a mere 2.2% of capacity and compare the consolidated gross margin to the PRC margin presented in this model.

Using the unit economics illustrated above, and applying consensus ASP and cotton prices expectations to the Texhong's realizable capacity in 2014 gets one to the following: 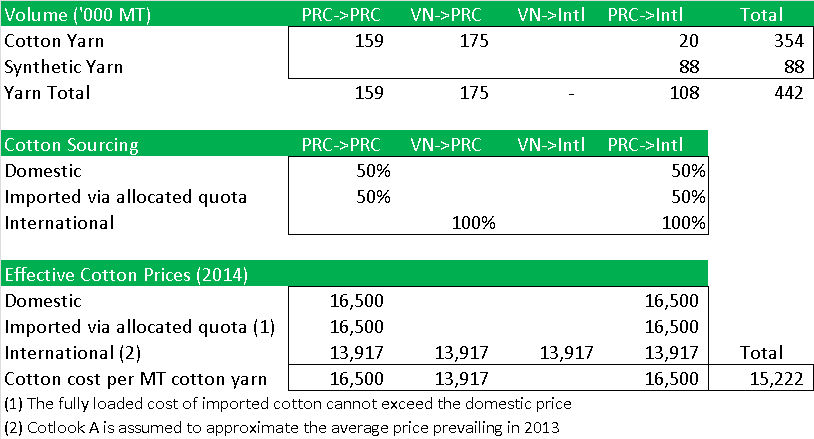 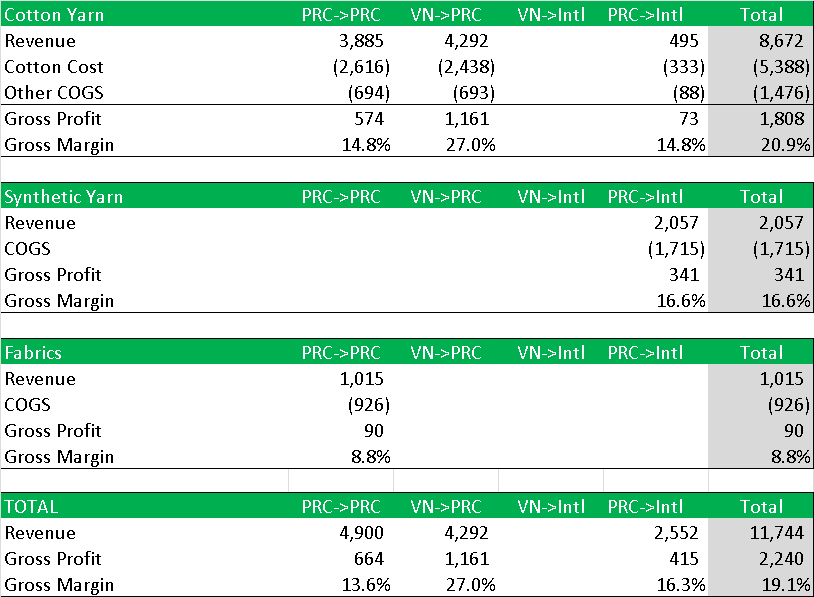 PRC gross margins expand and Vietnam gross margins shrink.That's not surprising. But if the dominant narrative in one's mind was that Texhong's strength lay in its arbitraging of the cotton price differential, the fact that the consolidated gross margin does not move when the spread is halved is going to seem both counter-intuitive and wrong. (And, if I may be so bold, reading this once is not going to do much to dispel that sense of implausibility; one has to reconstruct the unit economics for oneself to believe in its implications).

The margin of safety is defined by the gross margin that would prevail if the cotton price differential disappeared altogether: 14.7% for cotton yarn, 16.6% for synthetic yarns, 8.8% for fabrics, implying a consolidated gross margin of 15.7%. 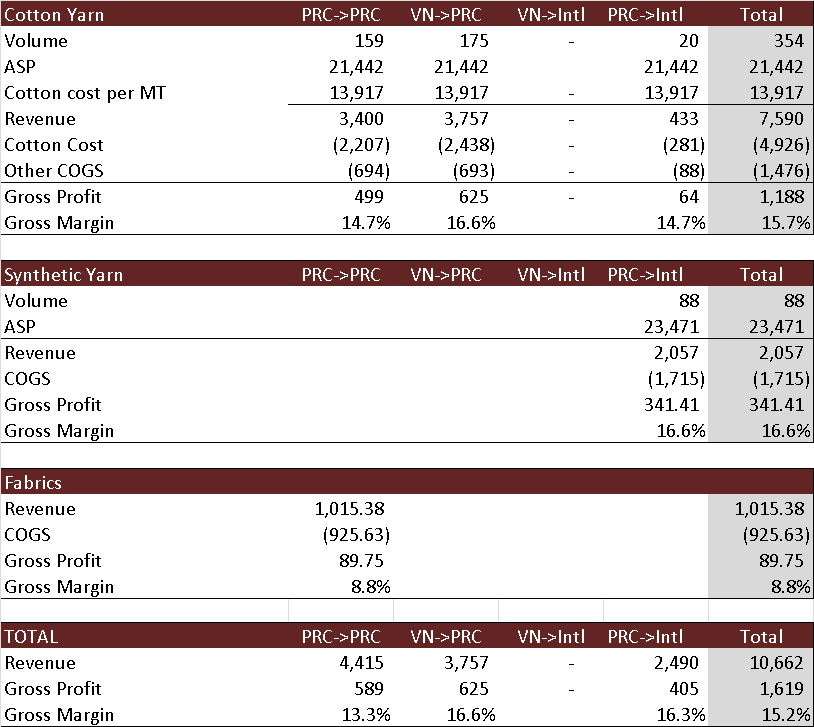 This is consistent with HK$0.86 in 2014 in earnings and a $0.26 dividend in 2014. The return on capital at this gross margin is 15% and improving. That's important because it implies that Texhong would grow its way to higher MOS values.


Why this stock? It's volatile, it's cheap, it's well-watched; and I (think I) understand the reason for the sell-off. If I'm right, therefore, the share price will triple in short order, probably upon publication of the 2014 full year results in March 2015.

Also, the owner-operators are, upon the available ten year record, as smart, young, entrepreneurial, and honest as one would like them to be. The company pays out 30% of earnings and grows via debt and cash flow rather than by raising equity. The "runway" is long and well-lit – with or without the Trans Pacific Partnership. When things get bad, Texhong buys failed competitors, when things go well it makes lots of dough.

Disclosure: I own Texhong shares. Do your own work.
Posted by red. at 4:09 PM