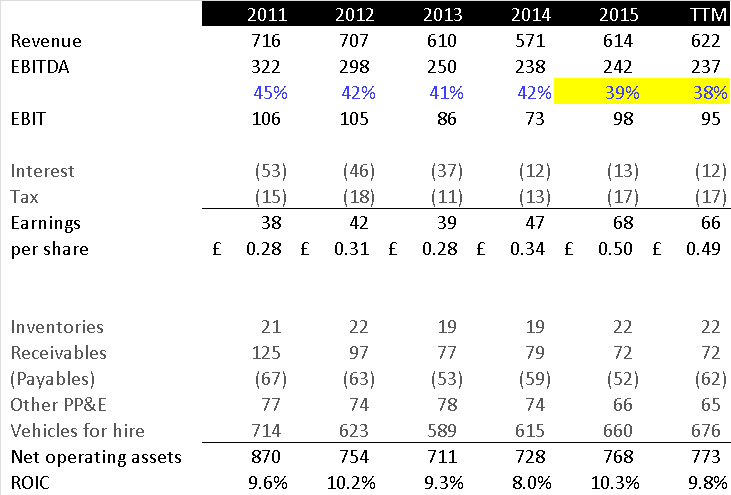 The apparent cause of the recent decline in share price is the margin deterioration highlighted above. Management has explained the margin decline as attributable to 15 (now 16) new sites in the UK that take time to ramp up -- there are start up costs and vehicles are introduced slowly but steadily as each site matures. This is not an after-the-fact excuse; I owned the stock and was paying attention in 2012/3 when Bob Contreras explained that this was in the offing.

From the section labeled "network" in the latest interim filing we can surmise the following, more or less: 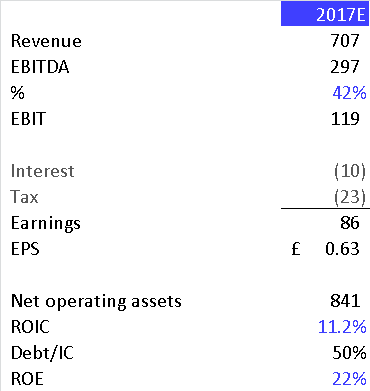 And this before a proper recovery in Spain, its other market.

In any case, a 12,5x multiple on 2017 earnings would not surprise and it seems to me that, along with dividends collected along the way, these shares offer a 100%  return.

This company is the leading provider of MRO components to industrial companies in Europe. The business model is, I think, well known: it provides suppliers a direct route to market and offers customers a single interface for accessing vast choice of products. It matches the many to many in a hub-and-spoke arrangement. Market share gains enhance the network effect and thereby entrench the leader's competitive advantage. And so on, I won't belabor the point. 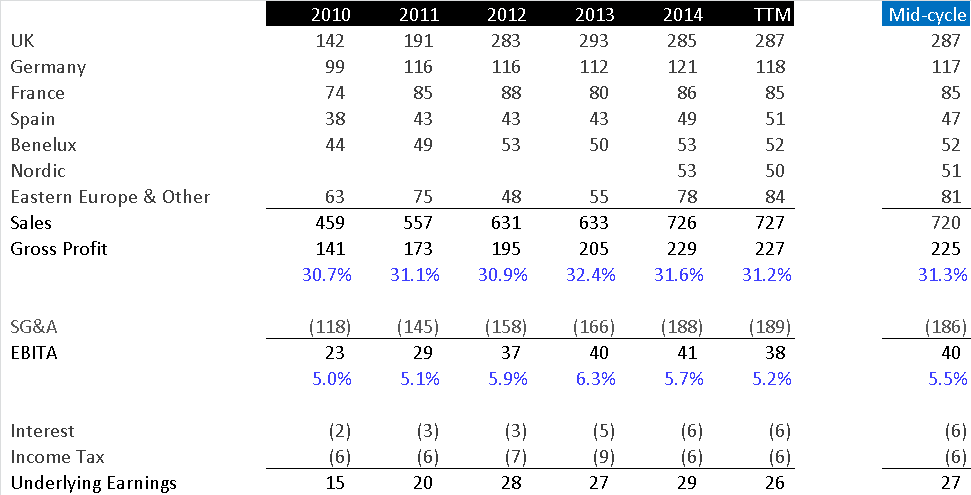 Brammer has been built by acquisition so it is worth taking note of whether it has created or destroyed value as it buys specialist distributors:

The conservative answer is that its acquisitions have thus far been value-neutral:

So one might value Brammer at 2.7x its net operating assets, thereby giving it no credit for growth:

Brammer's share price has fallen away because of its exposure to the Nordic area, the weak Euro relative to the Pound, etc. If these things correct themselves in two years then the path to a total return of 95% or so -- 80% from capital appreciation, 14% from dividends -- should be reasonably straightforward.

If not, MRO distributors tend to be cash generative in the downswing of a cycle as they shed working capital. A stylized illustration of that principle as applied to Brammer may look something like this:

Commenters below the line have expressed reservations about Brammer that I'll address in more detail here. The reservations raised thus far fall into the following categories:

1. It does not compound value / acquisitions are dilutive / there's no operating leverage.

These are historical questions and this is the long term record.

Let's say that one bought a share of Brammer in 2004 at 6x underlying earnings. (I'll turn to the exceptional items further down). These are the returns that one would have received:


2. It does not convert earnings into cash

This is also a historical question and, again, the long-term record is as follows

3. What about all those XO items?

The XO items are acquisitions related. Therefore I treat them as CapEx items as follows:

Again, the XO items have not disappeared and are not being ignored. They have been reclassified in order to make things easier to understand. Like this, for example:

Lever it up (see below) and the marginal return on invested equity is >20%.

Prior to 2007 it had no equity to speak of. Since then it has effectively had a policy of using a ~ 60:40 Debt:Equity ratio  in order to generate 20% returns on equity.

5. There is no downside protection

In case of a cyclical (rather than secular) downturn, I suppose.

We've had one major cyclical downturn in the last 10 years and working capital reversals came through as the business model would predict.

This is the most important issue, in my view, and there are no definitive answers. What I can say is that the business most like Brammer that I know of -- Fabory -- with similar exposure to explosive growth in Eastern Europe, was acquired by Grainger at a multiple of 1x sales in 2011.

That's all I've got for the moment.