I'm holding too many names and too little cash. Spectra and Avesco are weak links and I should dispose of them. My long exposure to Enterprise should be expressed in warrants only rather than via a mix of warrants and stock.  Rationalizing these and closing out my gains in Hawaiian should bring me to ~30% cash.  At the same time, Texhong, Emeco and Rain Industries should be larger positions than they are.

I am too exposed to China (Emeco, Keck, Texhong) and to the Canadian oil sands (Emeco, Enterprise, Lanesborough).

I need to to something about Lanesborough REIT: commit to it or get off the pot.

I need to find a security that is cheap and will perform especially well if interest rates rise.

No more lottery tickets like Unitek and Dolan -- they take up more time than they're worth.

Emeco’s debt is now more expensive and less restrictive than it was at last report.

The company is no longer exposed to Indonesia and Chile is now a proper business with $118 million in rental assets.

There is an encouraging "read across" for the Canadian business from Enterprise Group (see next post), which reports that "the first two months of operations for the second quarter of 2014 have delivered exceptional results with higher than anticipated demand for the Corporation's services in all three divisions and increased operating days compared to the same period in 2013. Due to the late onset of spring break-up and the prolonged winter drilling season, activity levels were above expectations during April and May that have typically been subject to a significant slowdown in the industry as a whole."

The Australian business is in poor shape. Utilization rates were in the low 40s, came back to 54, and seem now to be headed back to 40.

And all of this, of course, is happening in the shadow of  this expectation: 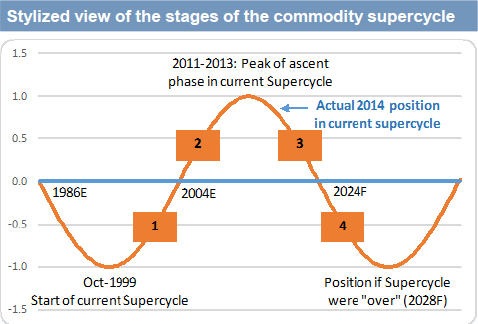 The market for new mining equipment has continued to collapse and informed observers are forecasting that it will fall by 1/3 again over the next year. 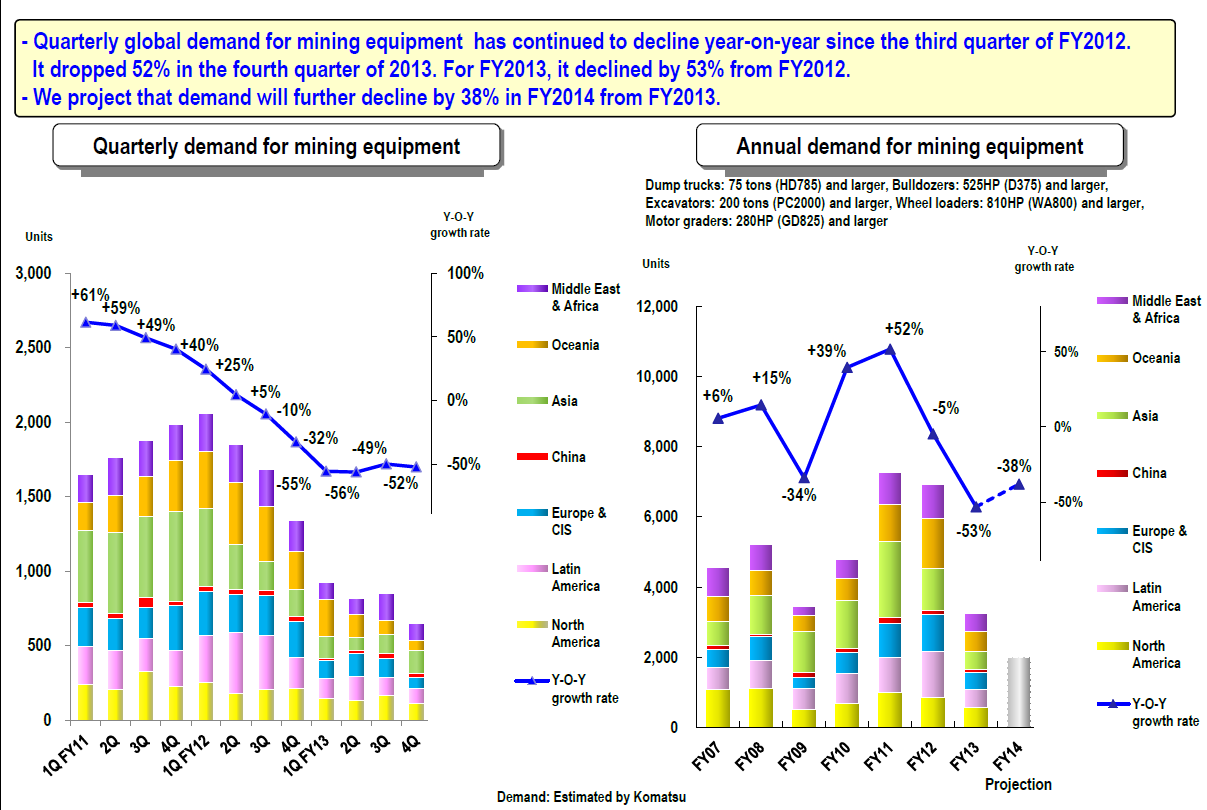 Keith Gordon has been replaced as CEO by Ken Lewsey. In Lewsey's first earnings call, in February, the headline was a 20% downward revision to Gordon's prior EBITDA guidance. In May, Lewsey's February guidance was itself revised down – by 15%. Progress of sorts.

Emeco seems to have one capable member of the executive team: the fellow who grew the Canadian and Chilean segments from scratch is now working on business development in OZ.

In FY 13, the company sold a $25 million package of equipment to one of its clients -- at book value. Lewsey indicated in the February 2014 conference call that it had two or more such packages in the pipeline. Emeco has, thus far in FY 2014, generated $68 million from other disposals, including those Indonesian assets that were sold off at half their book values.

The script -- if coal and gold mining do not recover and idle assets are sold at 1/2 book -- appears to read as follows: 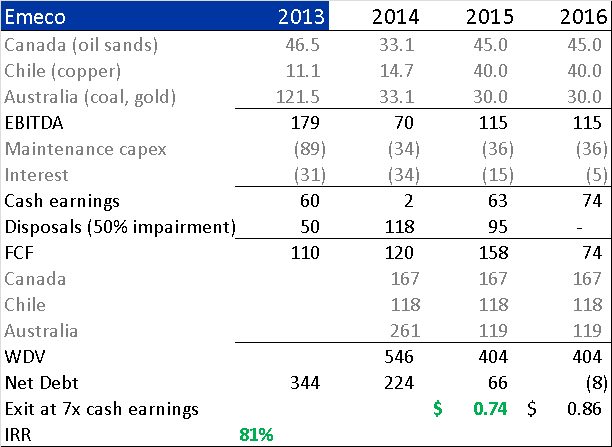 On the bright side, it could be that this has been a period in which the market has been absorbing excess used heavy equipment, that this equipment is approaching the end of its useful life, and that prices for heavy equipment will firm up a little. If so, the upside would be higher than I've indicated above. The market for Hawaiian's shares woke up in early autumn, pulled along by the market's optimism about consolidation in the domestic airline industry. It hit the $500 million mark in January, attracted institutional support, rose further, and narrowed the valuation discount to other US carriers.

It is now priced at 6x trailing EBITDAR, similar to ALK, its closest comp, and only 2 or 3 turns fewer than the majors.

Earnings will continue to improve as existing international routes mature, as it digests an extra 8% market share in its interisland franchise, and as capacity is rationalized in the Hawaii-to-North America routes. It is worth $25 to $35.

I will continue to roll forward my positions and try to take advantage of the stock's volatility. 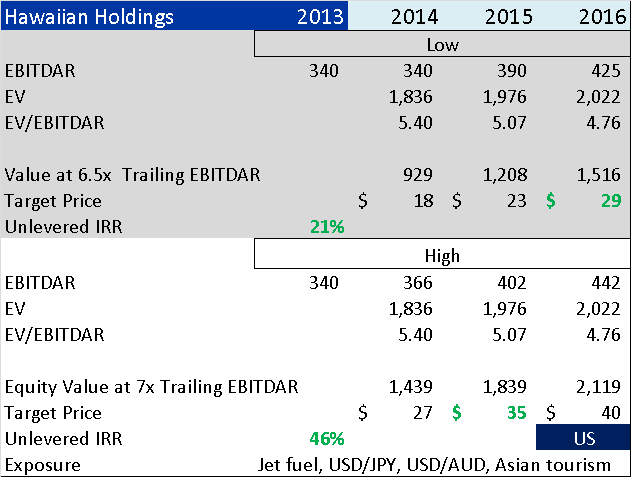 Texhong is a new position. I suspect that I'll have opportunities to buy more shares at lower prices in the coming months as older inventory is sold through at unattractive prices.

Texhong equity is covered by several sell side houses -- Credit Suisse, JP Morgan, CIMB, DBS Vickers, and China Stock -- and its credit is rated by both Moody's and S&P. This is DBS Vickers' take on how the narrowing spread will play out: 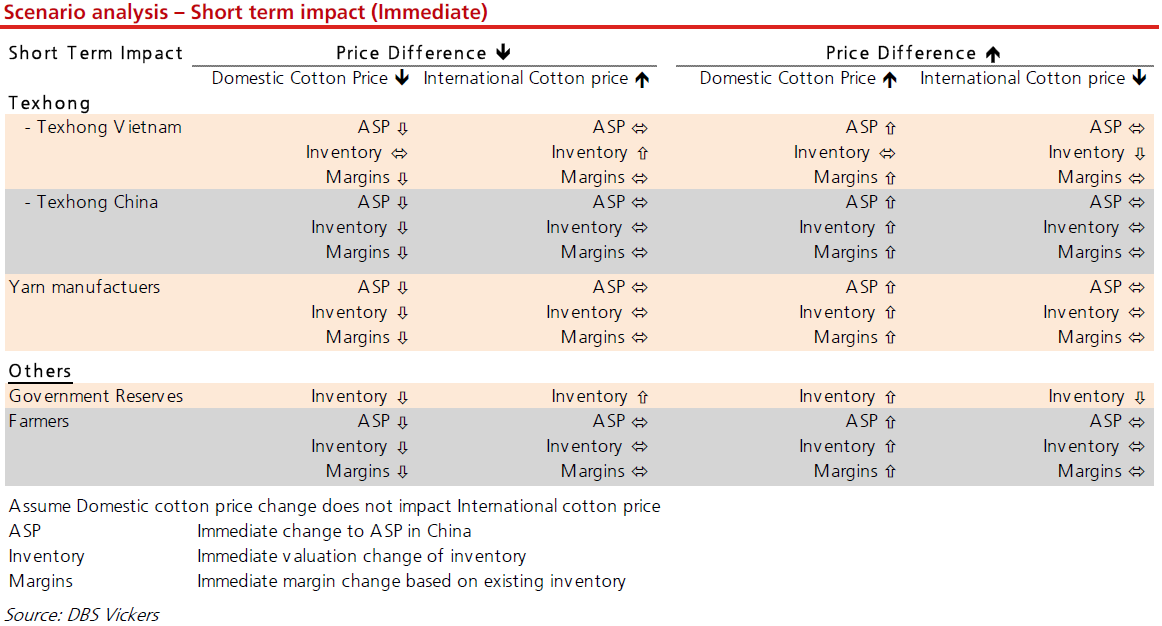 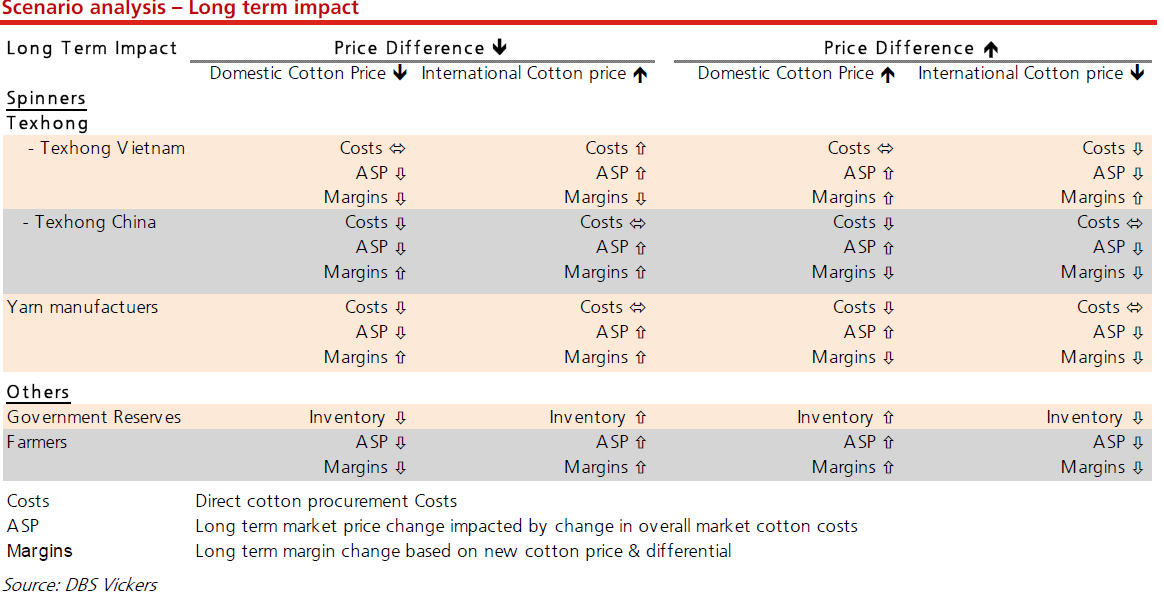 and this is my take on run-rate values -- i.e. ignoring the temporary compression in margins during the adjustment period: 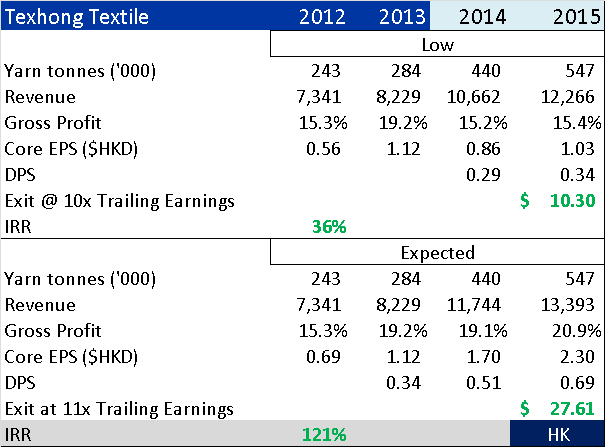 A credit rating downgrade after H1 2014 results would be helpful.


The business itself is doing well enough: the regulatory business is gathering customers at an acceptable rate; and LRM's agreement with Broadridge Financial Solutions should prove a useful distribution system for its collateral management products. UK and North America are strong, Asia is flat, and EMEA is weak.


What will they do with the cash flow after 2015? Nobody knows -- not me and not the market. Over two hundred software engineers in Shanghai says one thing, a depressed share price another. The longer the share price languishes, the more they dilute.

This should be trading at £80 - £90 million and I think losing money on this name is highly unlikely, but I wouldn't be shocked if it didn't reach its full potential. 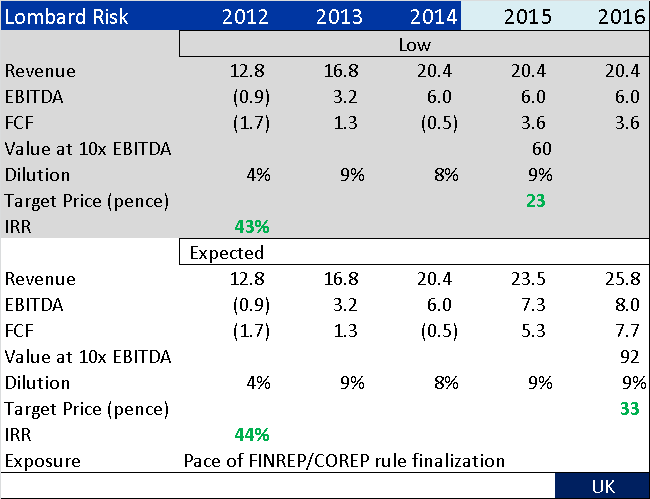 Disclosure: I own these securities. Always do your own research and thinking.