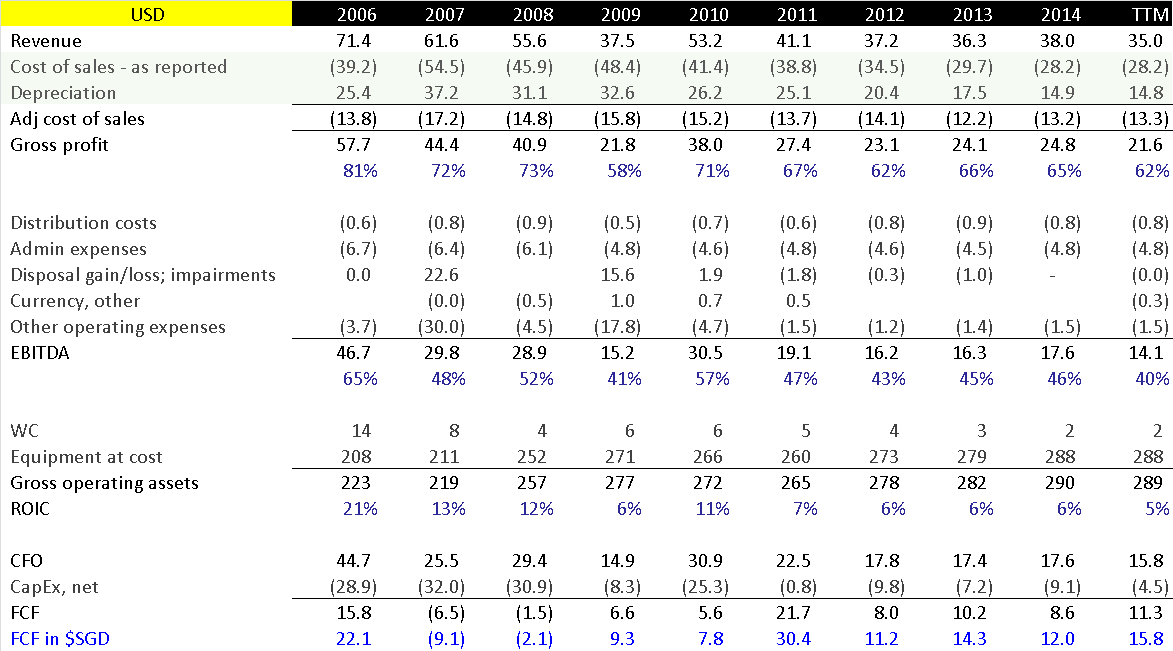 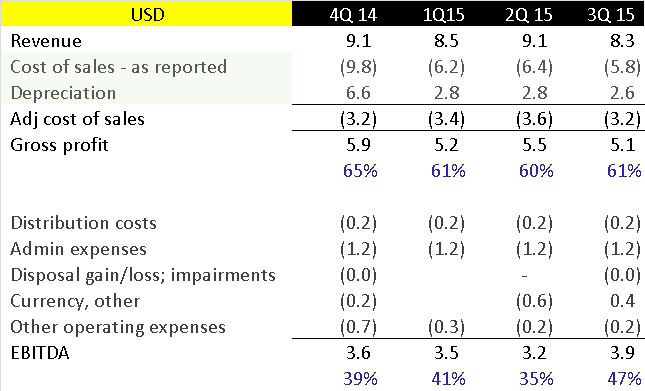 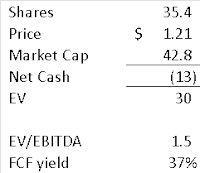 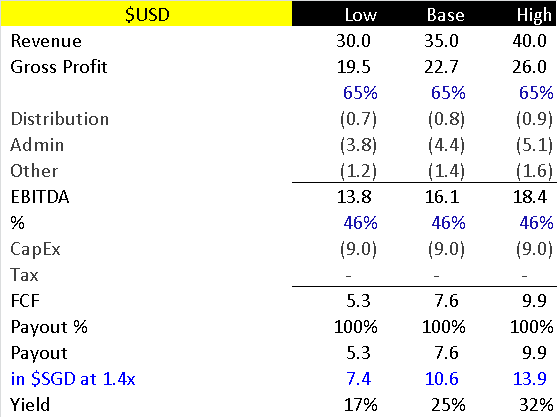 Disclosure: I own some shares in Global Testing Corporation
Posted by red. at 2:40 PM 12 comments:

This company operates in two segments. Via its shipping segment it is what is known a "gross tonnage provider" for major car and truck carrier operators. That's just what it sounds like: SSC buys ships that it immediately leases to, for example, Wallenius or NYK Line for fifteen year terms or longer. These operators in turn carry Toyotas, Mazdas and the like from the places where they are manufactured to the places where they are sold.

The gross tonnage provider -- SSC in this case -- benefits by locking in stable, long term cash flows albeit at lower average daily charter rates than it could command in the short-term charter market. This allows it to finance the purchase of the ships using lots of very low cost debt.  The charterer, in turn, benefits by earning a spread between the rates at which it charters the ships from SSC and the rates that it charges the auto manufacturers in the shorter term (usually one year or two year) market.

Relationships between charterers and PCTC ship owners tend to last for decades and ships are often chartered for back-to-back 15 year terms. Entering the market in the absence of such a relationship is unlikely to succeed.

SSC also has an agency and logistics segment that I won't be discussing here (though I'll address any questions in the comments).

The above values are in US dollars, SSC's operating currency. Capricornus, Centaurus and Taurus Leader are new enough acquisitions that their impact on SSC's earning power has not yet been fully felt.

So the market's valuation of SSC is offering what looks like a 15% earnings yield when the weighted average cost of SSC's debt is in the 2% range and the equity risk premium for the SGX composite is ~6%. On that basis alone, SSC is trading at half its value.

SSC is an 80+ year old company now chaired by the second generation and managed by the third, and it prides itself on returning cash to shareholders -- $200 million since 2008, 5.5c per share over the last ten years and so on.  If it were not for its growth plans the year ahead dividend yield would be 15% -- attractive when adjusted for the risk, which is far below average.

SSC's owner managers have also earned a reputation for doing what they say they will, and what they have been saying over the last year is that they are committed to doubling their fleet within three or four years.

I think that SSC can pay out roughly 1/3 of free cash flow in this period as dividends and will use 2/3 to provide the equity portion of its investments in new PCTCs. If so, it can buy one $US 80 million ship per year. Again, these purchases are made once under contract to the charterer and use very low cost debt financing. Taurus Leader, SSC's latest purchase was financed by >96% LTV debt at sub 2% interest rates. I am modeling 80% debt financing at 2% interest.

In any case I think it reasonable that the earning (and value) progression should look something like this:

The principal attraction of this idea is on the risk side of things. The upside is fine -- the stock is, in my view, worth north of $0.60/share today and will likely be worth ~$1/share in two or three years. But is the relative brevity of the list of things that can go wrong that stands out most.

These are quality owner managers running a company contracted to receive  fixed, multiyear cash flows from blue-chip counterparties and who have made credible promises to return excess cash to shareholders.

The one wrinkle that one ought to think about is the recent price-fixing charges brought against a number of players in the RORO charter industry. If price fixing were a necessary part of the charterer's business models then SSC's growth beyond the immediate 3 or 4 year period may not be all that it could have been.

The no-growth scenario may notbe fully appreciated because the full impact of the recently acquired ships is not reflected in SSCs trailing 12 month results.

The growth scenario implies a valuation in the $1/share range.

14 months on and one finds Macro decidedly out of favor. One can evaluate the pricing of the stock as follows: 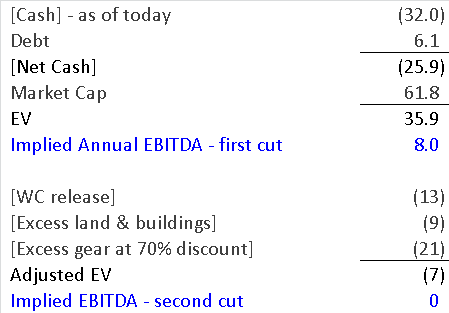 These are low expectations -- i.e., that the company will do approximately $30 million in annual work at 20% gross margins -- and, in light of what should be the steady nature of its bread and butter pipeline integrity work, I am not convinced that these expectations are realistic.

Second, one could attach some significance to the company's recently secured $115 million credit facility from TD Bank. This facility is intended to enable the company to post bid and performance bonds for possible LNG pipeline construction projects in the near future.

Surety bonds for this type of work usually amount to 10% of a project's value and Macro would be bidding as one, small member in a consortium of contractors.  That, I think, gives a fair indication of the scale of the upside potential beyond (1) multiple expansion to some realistic, non-zero number and (2) a return to O&G prices in the US$60+/$2.75+ ranges seen in recent years.

In other words, even if Macro's legacy work is worth zero, it seems to me unlikely that the option that it may win some LNG pipeline work  is also worth zero.

Macro is to be sure a "cigar butt" but, like Dawson, it is not a bad one and may yet turn out to be an excellent one.

Disclosure: I own some shares in Macro Enterprises 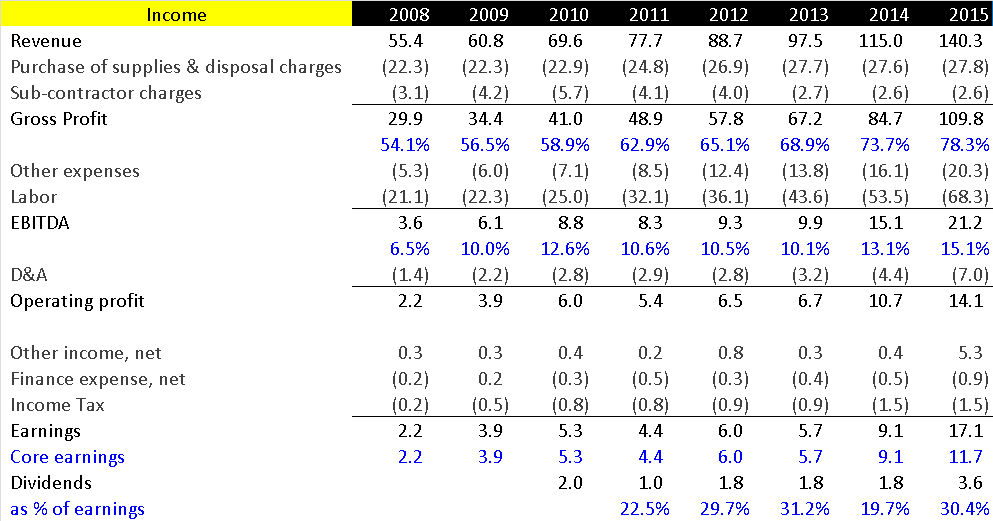 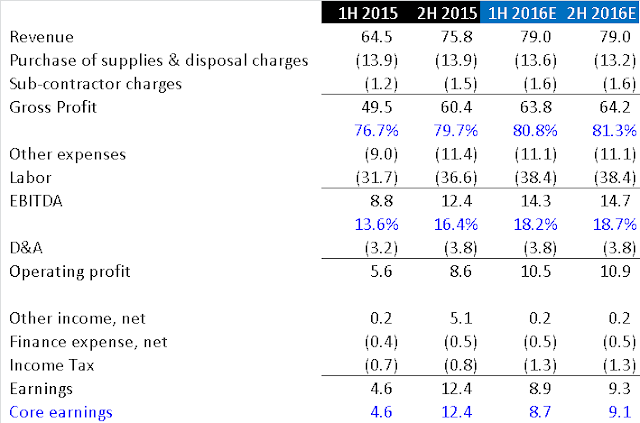