You may remember that E's business model is to: acquire mom-and-pop energy/infrastructure/utility businesses in Western Canada at <3x EBITDA; build them out through investments in additional equipment; maximize synergies between them through shared costs and cross-selling of services; and sell the entire package at >6x EBITDA in a market that sees an LNG construction boom stretching far into the future.

Things are thus far working out better than I expected. The company is undertaking heavy investment in specialized and, in some cases, unique assets, some of them protected by patents or exclusivity agreements, and all of which have payback periods of six to twenty four months, in order to satisfy pre-identified and contracted demand. And none of this demand is, as yet, directly tied to the LNG construction boom that is surely coming.

Happily, acquisitions, massive internal capex, etc makes E hard to screen for and moderately tricky to value. A reader has kindly sent me the transcript of a conference call conducted in March and I'll quote from that.

Calgary Tunneling & Horizontal Auguring (acquired in June 2013):
“The catalyst for growth here is this is a company that traditionally services all 3 of the segments I mentioned before: utility, infrastructure and energy . . . In the energy business they are exposed heavily to the long distance, large diameter pipeline construction world. What they do there is they put in all the crossings in a pipeline construction design . . . This is an aspect of the business and for the next 5 to 7 years this segment has never seen a construction roster as deep as we’re seeing right now for long distance large diameter pipeline construction projects. Even eliminating what is in front of us with LNG it’s a very long roster.

. . . If you don’t mind I wouldn’t mind adding that Calgary Tunneling is a very specialized tunneling company. It only has one other major competitor in Western Canada that can compete at its level and right now both companies are booked solid. You’ll see expansion in both of these divisions going forward.”

TC Backhoe (acquired in 2007):
“Historically, I think I mentioned in my talk earlier that TC, our division, had a fleet of 6 or 7 hydro trucks and most of the activity those trucks would do were in our basket of services. In other words it was a service we provided with a technician. We’d make a hole in the ground and our technician would go down and make the repair or termination and we’d clean up the job . . . What we did in late 2013 is we hired a hydrovac expert, a long time guy in the business and at one time was with Badger (Badger Daylighting, ed.) in his history. What comes with him is not only his expertise but he has a great deal of relationships in and around the industry. He was able to bring basically hydrovac services only without any technicians.

So, in other words, providing hydrovac services to open up pipeline integrity inspections and this kind of thing was a business we never did before at TC but with this gentleman’s expertise and relationships we’ve been able to advance ourselves into that business. Now that’s the business that Badger is in and there is an extreme demand for the service that outstrips the capacity for the actual units in industry at the moment.

. . . It’s a good opportunity to take our fleet from 6 to 20. . .This is an extremely profitable division for DC. . . .We’ve ordered and taken delivery of 8 of 14 and have 6 more being delivered over the next 3 ½ months. These machines cost just under a half million to build and they bill out over that in just over 8 months. It is an extremely profitable division and we’ll expand that hydrovac division as long as we have long term commitments. We’ve got a 30 month commitment with Trans-Canada Pipelines and a 24 month commitment with Kinder Morgan and a 2 year commitment with Somerville and so we don’t mind making those investments knowing we have our money back in less than a year and great upside going forward  . . . Basically the demand is there for the product and we’ll supply it as long as we can see getting our money back and turning it into a long term investment.”

Hart Oilfield Services (acquired January 2014):
"There are other competitors in the site infrastructure rental business. The difference with Hart is they (sic, "they" should be “we” throughout, ed.) have designs on their units or what have you that create a tremendous amount of transportation efficiencies as well as the design of the equipment is very innovative . . . Basically they provide the Shells and Encanas of the world equipment that is much more in demand than any of their peers. They are operating over 2000 pieces of equipment and if they had 4000 it would be in demand. So there is a great deal of our cap-ex going to this particular operation because the demand is there . . . What they do is just acres and acres above what their peers provide. It’s a very exclusive offering that we will spend a great deal of our resources building the fleet on that particular business."

Artic Therm (acquired 2012):
Artic Therm is one of our more exclusive businesses . . . In 2000, the company was successfully heating pipelines in the field and been doing it for well over a decade. It is a business that’s growing. They only had 4 clients in the first decade out of choice. They operated the business without wanting to make it any bigger and since we bought it we tripled the client base and extremely grown the revenues in a big way of almost double the first year we took it over. We’ve increased the fleet by billing weight well over 2 times.

So it is an opportunity that has more demand than we have equipment. We’re going to be spending more cap-ex again this year on more units and the catalyst for growth for this company is quite astonishing.

The smaller units are something you’ll see all over Canada and North America, but the big trucks that technology is very exclusive and new to the industry. And right now the opportunity right in our backyard is huge for us to fulfill with all the new clients we’ve been bringing on . . . (And) what you may see this fall is us looking at licensing that technology into some of the areas of North America like the Balkan and down into Texas and Louisiana and up the Eastern seaboard. It is something that we’ll look at and kind of following the same track that Badger did with their hydrovac truck operations.

When we made the acquisition of Artic Therm the proprietor and management of the business built that business working basically from September/October and right until May and bring all the equipment home and actually not work during the summer season for two reasons: it fit the lifestyle they wanted to provide themselves and at the other side they worked so hard during the premium heating season that the break was welcome . . . We as Enterprise since the acquisition we’re of course implementing a program to make this a 12 month revenue stream rather than just 7 or 8 months. . . the tank storage shut down application for the big units is a 12 month business that the previous management didn’t pursue . . . Enterprise is pursuing it and we’ve done a great deal of marketing and have for the first time since Enterprise has owned ATI we have now booked work for this summer. So the applications for the large units for 12 months of the year will happen in earnest this year. Again, it’s a market we’re developing and shareholders should understand that it will take time to develop ATI’s business to 12 months. This year will be a very good start at it. I will definitely say last summer there was very little revenue from ATI during summer months but that will change starting in 2014 and I expect a dramatic increase in 2015 for summer work.

Business fundamentals are only half of a roll up story and the financing/capital structure story is also discussed in that transcript. 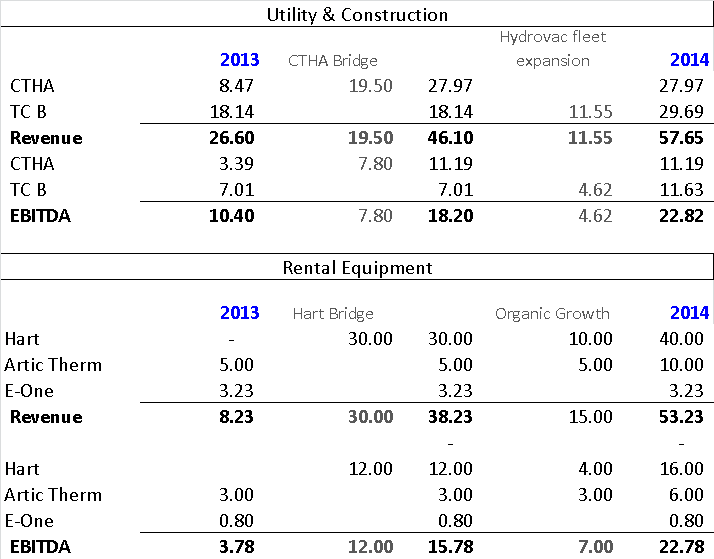 Warrants or stock? A reasonable argument argument could be made for either. The smart play may be to have an equity anchor and to supplement it with trades in (~$0.20) and out (~$0.40) of the warrants.

Lots of sell-side coverage for a microcap and the latest initiation is  here.

Edited June 29 to correct spreadsheet stupidity.
Posted by red. at 9:33 AM