(i) Other than Food & Catering
Let me first attempt to contextualize the discussion about the food and catering business by removing it altogether: 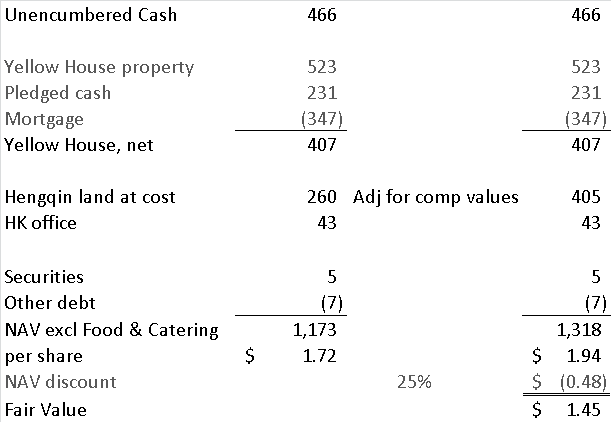 A refresher: the food and catering business consists of a number of parts that, for the sake of clarity, I will categorize as follows
In the casino-located footprint are a number of high margin restaurants -- five "Edo" branded outlets serving Japanese food and one "Shiki Hot Pot" branded outlet serving Chinese food -- that cater to the VIP trade and make Future Bright as profitable as any publicly traded restaurant business as you and I are likely to ever come across.


The cost of food, rent and labor -- 90% of its restaurant operating costs, in other words -- are variable. Punters who would pay 800 MOP for a meal at a high-end casino restaurant can tolerate high mark-ups on alcohol. There are no marketing expenses associated with the VIP (and most of its other) restaurants because they cater to captive traffic -- at the airport, the university, the hospital, the mall, and the casino. These factors, in my view, sum to high and stable margins. 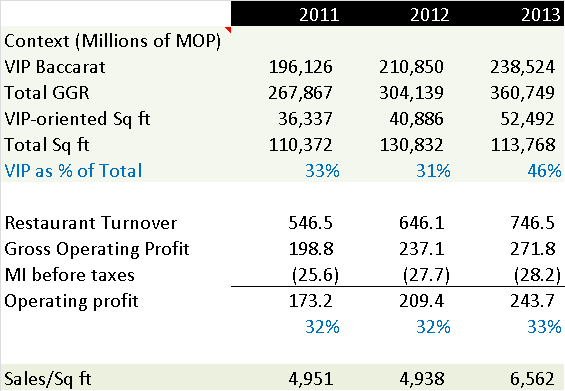 I suppose that the notional bear case must be (and, as far as I can tell, is) that Future Bright is heavily dependent on the VIP trade, that VIP attendance in Macau is in terminal decline because of the anti-corruption and anti-money laundering crackdown in the PRC, and that the company's earnings power is therefore permanently impaired. And, in there somewhere must also be a theory about tremendous margin compression as VIP sales decline.

I'm now going to try to unpack the results reported for 2014.

The second half of the year, the period in which Macau gross Gaming Revenue (GGR) collapsed, also saw the company open new food and catering outlets at the Macau International Airport, the J Plus Hotel in Hong Kong, the One Oasis Residential complex in Macau, and the University of Macau's New Campus.

The fourth quarter (mid October) also saw the launch of the company's operations in Huafa Mall on the PRC side of the border with Macau.

I have knitted together the company's same store sales (SSS) and other information to derive an estimate of Huafa's sales for the period between Mid-October and the end of December:

If I assume that Huafa Mall rents are in line with retail rents in Zhuhai more generally, this follows: 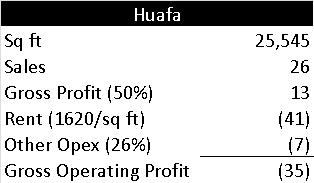 So an approximately right representation of Future Bright's  2014 results looks, I think, something like this: 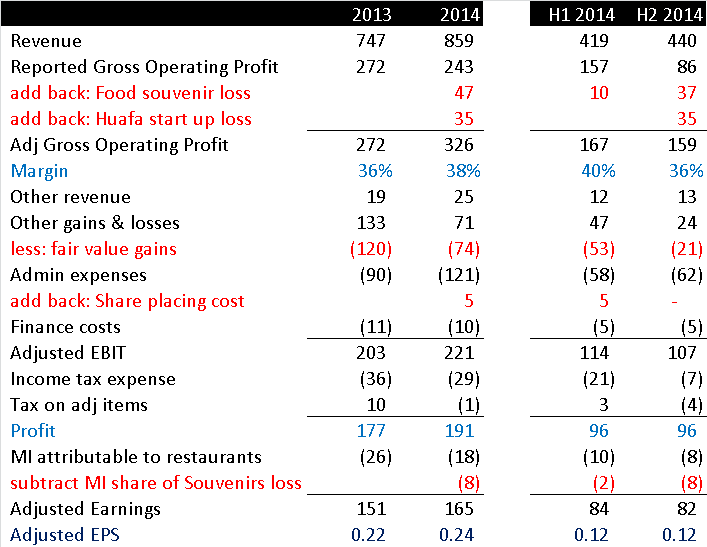 Coming back to the margin compression idea implicit in the notional bear case, if it is there I don't see it as clearly as I should:

Macau GGR and VIP GGR are headed toward 2011 levels from which they are expected to grow at a rate that matches the PRC's reported GDP. That's the plan that Macau and PRC seem to have agreed on. Most publicly listed Macau-related stock are priced for that scenario. The fourth quarter of 2014 was more or less comparable to 2011 and while YoY GGRs are still falling MoM comparables have stabilized.

As I have said before this is a stock I think highly likely to double at least three times within the next four years. The best thing, I think now, is to make the case for each doubling separately and at the appropriate time.

Here is a signpost justifying the first doubling: 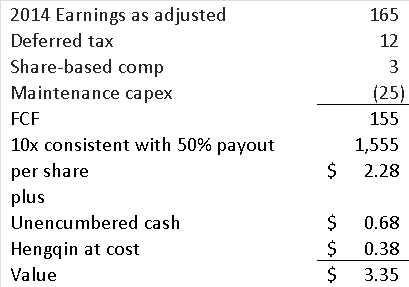 This assumes, obviously, that the food souvenir business, and the 126,000 sq ft of restaurant and food court space at Huafa Mall breaks even -- but no more than that.

The immediate pathway to closing the gap to ~$3.50 seems to me to consist of three steps:

1) the cessation of dramatic YoY declines in GGR will likely turn Macau sentiment around. We appear to be three or so months away from that eventuality;

2)  the interim results in July/August ought to show a dramatically reduced bleed from the food souvenir business and Huafa operations; and

3) a sale of a part interest in the Hengqin property seems to me to be a course of action that is both sensible and one signaled in the Annual Report.

It would make sense to me if such a sale occured before November.

The risks at this stage are principally the company's exposure to any future sustained tension between Japan and China, on the one hand, and its reliance on Chan Chak Mo on the other.


Disclosure: I own some shares in Future Bright.
Posted by red. at 8:29 PM 76 comments:

When I first wrote about Texhong I suggested that the low-end run rate gross margin would approximate 15.7%. The full year 2014 results seem to bear this out.

Remember that the company holds 30 days of inventory so that as prices fall last month's more expensive cotton is sold on at today's lower prices. It is the direction -- and not the level -- of cotton prices that matter.

This is what happened: 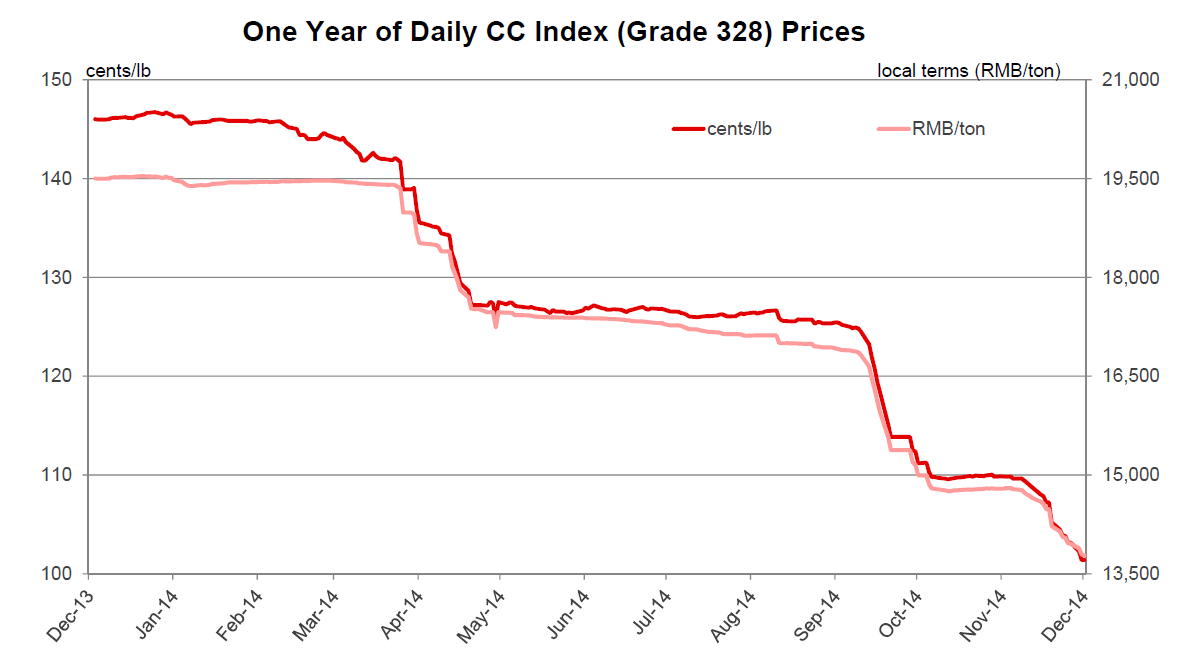 and this is the impact that it had on Texhong's gross margin:

One can also see its imprint in the balance sheet: 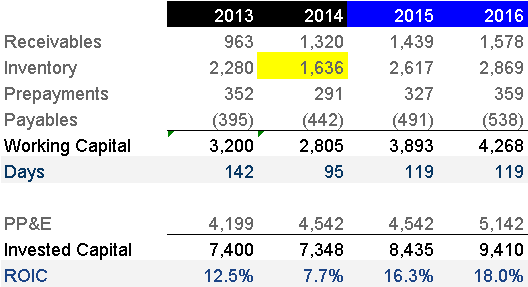 Now that cotton prices appear to have stopped falling, adding that back get us to this: 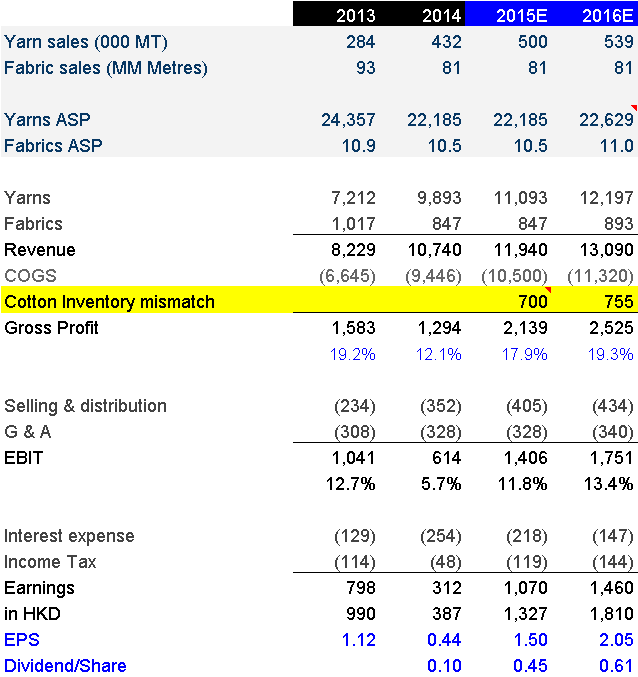 The next issue is that of the appropriate multiple to apply to these estimated forward earnings (or dividends).

Its bonds are publicly traded and rated by, inter alia, Moody's. An upgrade of the bonds ought also to improve the market ratings of the equity.

Second, this is a company with a history of domination, ambition, and profitable growth, and whose long-term outlook is no worse now than it has been in the past.

If 10x earnings is conservative then $15 is at the low end of fair value.

Disclosure: I own some of these shares