A Brief Sketch of My Approach to Value Investing

I generally find it easier to identify securities that are likely to appreciate by 2x or 3x over 2 or 3 years than I do those that go up 50% within a year. I am not capable of doing especially well in either “event-driven, special situation” ideas or in “forever portfolio” ideas.

So, for me, a good idea is a security:
If the idea has all of these features -- safety, upside, robustness, and timeliness; more on these later -- I feel comfortable allocating a meaningful (10% to 25%) share of my funds to it.

How many good ideas one is able to find (or recognize) in any given year is of course a function of one’s level of effort, experience, “circle of competence”, account size, and so on.

I look at maybe a hundred and fifty to two hundred ideas a year spending fifteen to twenty hours a week to do so. In about half of these ideas I can see how I could lose money. In approximately a third of them I can't see a reasonable upside. Of the remainder, most are, when push comes to shove, just a little too complicated for me to really get behind or just a little too abstract; I can see that they're probably safe and I can also see that they will probably perform well, but I'm not sure. Of the remainder -- we are in single digits now -- I eliminate those that conflict with a current holding and buy those that I think are the most time-certain. In this way I figure that I am able to find two or three good ideas in an average year.

So in my highly stylized view of how I’d like things things to look, I ought, at any one time, have six good ideas in my portfolio paying out more or less in alternate years.

In the real world, of course, some ideas will work out better and sooner than one expects, and some worse or later, but the central tendency should approximate this outline.

If the security doesn’t look as promising as when one bought shares in it, one can sell it and move on. If its price falls in the interim, one has the choice of adding to it or of lowering one’s cost basis by trading around the volatility in the stock price. But, for me, the principal advantage of doing things in this way is that selectivity helps keep my standards reasonably high (and the error rate reasonably low).

[The 20% cash position is there for use during important market declines – it is important psychologically and, if invested in a reasonable manner during a market decline, should help keep one’s full cycle CAGR at an elevated level].

Cash gains are reinvested and therefore compounded. Mark-to-market losses should, in theory, not matter – if one invests in a discounted security it is, by definition, underestimated and anything could happen to its share price until one’s appointment with it two or three years hence. In practice it matters – psychologically. That’s why it is important to do the necessary work beforehand, to avoid blind coat-tailing, to not be seduced by potential upside alone, and to know the limits of one's technical and emotional competence.


This, then, is a kind of road map that I use in charting my investment strategy, such as it is, and every major decision that I make is subject to its constraints and possibilities.

If I lay out the positions that I've written about that have constituted at least 15% of my portfolio by cost – that is, my highest conviction positions  – they correspond to the outline as follows:

Note the color coding: I replaced CEGID with Northgate, Lamprell with Emeco, Lombard Risk with Future Bright -- in each case because I thought the newer security lower risk than the one being replaced. Therefore my investments in CEGID, Lamprell and Lombard Risk did not last long enough to either reap the rewards or suffer the indignity of losses at the appointed hour.

Spare a thought also for Consciencefood Holdings which was in spirit one of my highest conviction positions and would have been sized at 15% or 20% had I the opportunity to buy more shares. It was taken out by the owner-manager before I managed to do so.


This is how they would have played out :

If one is not serious about risk management this road map leads straight to the poorhouse. Investment returns are therefore meaningless without a consideration of the risks taken to achieve them.

There are, I think, four ways to manage risk: knowing what you own, applying a “margin of safety”, hedging as necessary, and diversification. The appropriate balance between them will vary from person to person and will depend also on the nature of the securities involved.

I, for example, prefer a heavier emphasis on MOS than I do on broad diversification because I think that I can apply MOS correctly most (though certainly not all) of the time. Four to six more or less equal positions and twenty percent cash is my sweet spot. I hope to attain a level of competence that will allow me to one day hold 8 or 12 names on average without increasing my risk profile.

I am not persuaded that “margin of safety” is simply an x% discount applied to either some metric derived from the financial statements.

Instead, I try to imagine the worst case scenario that can reasonably come about for the business’ (or assets’) prospects over the relevant investment horizon. I then overlay the least attractive capital allocation decisions consistent with management’s prior behavior, and value that.

That’s the margin of safety value at a particular point in time: provisional, inexact, contestable though not controversial, and sufficient for the time-frame that I'm concerned with -- two or three years.

Again, for context, here are my contemporaneous attempts at MOS assessments of my high conviction ideas. Two prefatory points first:

First, I am far more strident when talking to myself than I would ever be in a blog post and the tone of what follows reflects that I'm afraid. I also think now, in hindsight, that I was on at least a little less sure ground in sizing up the safety of some of these names than I imagined at the time.

Second, the premises vary according to the nature of the business but I am in each case looking for something that can be absolutely counted on to permit a net present value of cash payouts greater than the price paid for the security. 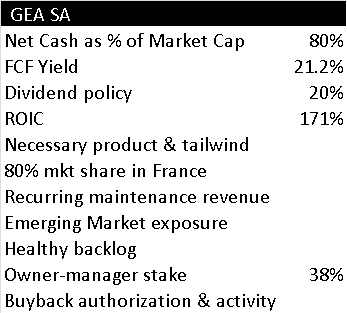 An asset-light business that could cover its operating expenses from maintenance service contracts alone,  engaged in a line of work that is both non-discretionary and not subject to near-term technological obsolescence. Sixteen years of dividends are covered by cash already in the bank. Sustainable free cash flow is 105% of enterprise value and this at a low point for infrastructure spending in France.

Although dominant in France, it is also exposed to emerging markets where revenues are growing and margins are much fatter. Toll roads are everywhere a growth business. There is a verifiable backlog. There is customer concentration but the relationship between it and its customers seems as much partnership as client-supplier.

So revenue probably won't fall by much. If it does fall, operating profit won't fall by much more than that. The only effect of a share price decline would be to increase the efficacy of the buyback program and therefore make the equity more valuable still. All things considered I find it hard to imagine how the net present value of the dividends received by GEA shareholders will not exceed 45/share. 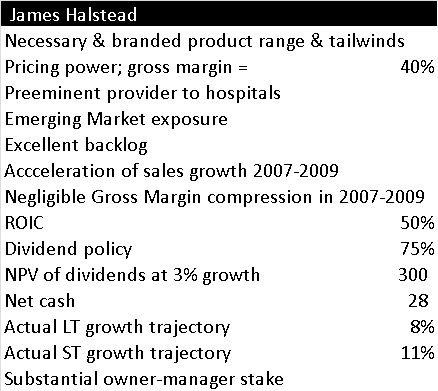 An unusually high and stable gross margin combined with accelerating sales growth through the 2007-9 period is the most obvious sign that economic conditions would have to get a great deal more desperate than they have recently been for this business to suffer even minor indignities along its long term growth trajectory. Hospitals would have to stop being built even in emerging markets. Replacement of installed flooring in preexisting hospitals would have to be deferred.

A rock solid dividend policy means that all discretionary cash flow not invested for growth has been and would be paid as dividends. No growth therefore would mean a 9% inflation-protected dividend yield for a very long time, longer certainly than the time to recover the value paid for the shares. 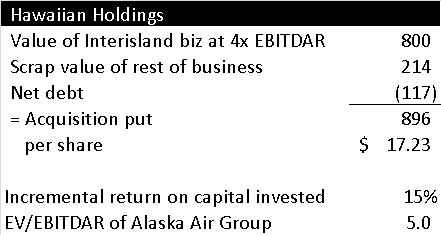 90% market share in interisland traffic means pricing power. Oil goes up, fares go up by more. Oil goes down, fares go down by less. Meaningful competition in this segment would require 100 additional daily flights and would therefore require additional airport capacity to be built. But the main airport has already just been extended by the state -- and partly paid for, and occupied by, Hawaiian.

This interisland business generates $220 million in EBITDAR.  It's not particularly cyclical but give it a haircut anyway and call it $200m.

Alaska Air Group is larger and better capitalized than Hawaiian, is structured in a similar way, and is also its direct competitor. It trades at 5x EBITDAR. If Hawaiian's West Coast and International businesses were to fail, it would make compelling economic sense for ALK to purchase Hawaiian.

If ALK were to acquire Hawaiian at a full turn less than its own EBITDAR multiple, close down the West Coast and International operations, and liquidate the associated aircraft, the effective purchase price of the interisland franchise would be $700m or 4x FCF. Doing so would also lead to reduced capacity -- and therefore higher fares -- in the West Coast-to-Hawaii routes, allowing ALK two ways to benefit.

So Hawaiian's "acquisition put", or low-end "private market value" is ~$17.

.. to be continued in next post. I'll also talk about upside and timing, tie the three (safety, upside, timing) together, and relate them back to the road map idea. In the post after that, I'll give my current holdings the same treatment as I did the names that have played out and see how they stack up. I'll then say something about how and where I look for ideas.
I don't want anyone to get the impression that my approach is appropriate for most people or even for most active investors. It is not. My last post in this "series" will be about that.
Posted by red. at 9:10 PM 40 comments: