Next up is the Universe Group.

Wexboy has written about this company in his own inimitable style and I have nothing to add to his analysis, which I think is spot on.

Now that the extraneous businesses have been shed, and the core petrol forecourt/retail payments business is all that remains, we can have a look at its historical, pro-forma profile: 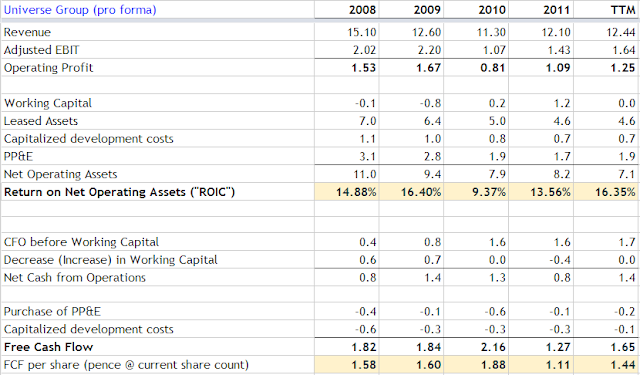 A valuation of ~6.4p is not unreasonable:

Half-price is fine, but there are currently (still) many decent UK stocks selling at half price.

I have included it in my UK picks for 2013 because I think that there’s a more than reasonable chance that it will be acquired by Vianet after all: Vianet still owns a substantial share of UNG, and UNG’s business would represent a common sense tuck-in acquisition for Vianet.

Disclosure: No position
Posted by red. at 7:03 AM No comments: 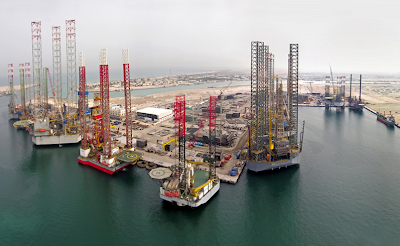 The dearth of value stocks in the United States is startling. The above represents my attempt at simulating a portfolio that will handily outperform the index in 2013. I have excluded those stocks that I own.
Posted by red. at 11:41 AM No comments:

This is a second in a series of four. Same guidelines & caveats apply here as for the UK portfolio I posted last week. It is notable that all but one of the above stocks feature in mmi’s “BOSS score” harvests at Value and Opportunity. Google Docs doesn't have ticker codes for some of the above, so I'll update manually and occasionally. Disclosure: I have positions in Precia, GEA and Cybergun
Posted by red. at 9:58 AM 2 comments:

Insight, arithmetic, prudence, and patience. Of these, insight is the hardest to come by and its cultivation is the highest form of craft that a value investor can aspire to – a form of sustainable advantage in an activity with otherwise nonexistent barriers to entry.

This is what one money manager wrote to his limited partners in 1967:


“the really sensational ideas I have had over the years have been heavily weighted toward the qualitative side where I have had a ‘high probability insight’. This is what causes the cash register to really sing. However, it is an infrequent occurrence, as insights usually are, and, of course, no insight is required on the quantitative side – the figures should hit you over the head with a baseball bat.”

Insight is more likely to be a precise, sophisticated, and straightforward discourse on the interaction between a business model and the strategy that supports it than it is to be a throwaway line like “market share”, or “scale”, or “brand”.


“The question for the group is simple: Why has Wal-Mart been so successful? To start, I call on Bill, who had some experience in sales during the earlier part of his career. He begins with the ritual invocation of founder Sam Walton’s leadership. Neither agreeing nor disagreeing, I write “Sam Walton” on the board and press him further. “What did Walton do that made a difference?”

Bill looks at my labeled box on the board and says, “Walton broke the conventional wisdom. He put big stores in small towns. Wal-Mart had everyday low prices. Wal-Mart ran a computerized warehousing and trucking system to manage the movement of stock into stores. It was nonunion. It had low administrative expenses.”

It takes about thirty minutes for six other participants to flesh out this list. They are willing to throw anything into the bin, and I don’t stop them. I prod for detail and context, asking, “How big were the stores?” “How small were the towns?” “How did the computerized logistics system work?” And “What did Wal-Mart do to keep its administrative expenses so low?”

As the responses flood in, three diagrams take shape on the whiteboard. A circle appears, representing a small town of ten thousand persons. A large box drawn in the circle represents a forty-five-thousand-square-foot Wal-Mart store. A second diagram of the logistical system emerges. A square box represents a regional distribution center. From the box, a line marks the path of a truck, swooping out to pass by some of the 150 stores served by the distribution center. On the return path, the line passes vendors, picking up pallets of goods. The line plunges back to the square, where an “X” denotes cross-docking to an outgoing truck. Lines of a different color depict the data flows, from the store to a central computer, and then out to vendors and the distribution center. Finally, as we discuss the management system, I draw the paths of the regional managers as they follow a weekly circuit: Fly out from Bentonville, Arkansas, on Monday, visit stores, pick up and distribute information, and return to Bentonville on Thursday for group meetings on Friday and Saturday. The last two diagrams are eerily similar—both revealing the hub structure of efficient distribution.

The discussion slows. We have gotten most of the facts out. I look around the room, trying to include them all, and say, “If the policies you have listed are the reasons for Wal-Mart’s success, and if this case was published—let’s see—in 1986, then why was the company able to run rampant over Kmart for the next decade? Wasn’t the formula obvious? Where was the competition?”

Wal-Mart’s advantage must stem from something that competitors cannot easily copy, or do not copy because of inertia and incompetence. In the case of Wal-Mart, the principal competitive failure was Kmart.… After some moments I ask a more pointed question: “Both Wal-Mart and Kmart began to install bar-code scanners at cash registers in the early 1980s. Why did Wal-Mart seem to benefit from this more than Kmart?”

I turn back the whiteboard and stand right next to the boxed principle: “A full-line discount store needs a population base of at least 100,000.” I repeat his phrase, “The Wal-Mart store needs to be part of the network,” while drawing a circle around the word “store.” Then I wait.

With luck, someone will get it. As one student tries to articulate the discovery, others get it, and I sense a small avalanche of “ahas,” like a pot of corn kernels suddenly popping. It isn’t the store; it is the network of 150 stores. And the data flows and the management flows and a distribution hub. The network replaced the store. A regional network of 150 stores serves a population of millions! Walton didn’t break the conventional wisdom; he broke the old definition of a store.

When you understand that Walton redefined the notion of “store,” your view of how Wal-Mart’s policies fit together undergoes a subtle shift. You begin to see the interdependencies among location decisions. Store locations express the economics of the network, not just the pull of demand. You also see the balance of power at Wal-Mart. The individual store has little negotiating power—its options are limited. Most crucially, the network, not the store, became Wal-Mart’s basic unit of management.

In making an integrated network into the operating unit of the company, instead of the individual store, Walton broke with an even deeper conventional wisdom of his era: the doctrine of decentralization, that each kettle should sit on its own bottom. Kmart had long adhered to this doctrine, giving each store manager authority to choose product lines, pick vendors, and set prices. After all, we are told that decentralization is a good thing. But the oft-forgotten cost of decentralization is lost coordination across units. Stores that do not choose the same vendors or negotiate the same terms cannot benefit from an integrated network of data and transport. Stores that do not share detailed information about what works and what does not cannot benefit from one another’s learning.

If your competitors also operate this kind of decentralized system, little may be lost. But once Walton’s insights made the decentralized structure a disadvantage, Kmart had a severe problem. A large organization may balk at adopting a new technique, but such change is manageable. But breaking with doctrine—with one’s basic philosophy—is rare absent a near-death experience.

The hidden power of Wal-Mart’s strategy came from a shift in perspective. Lacking that perspective, Kmart saw Wal-Mart like Goliath saw David—smaller and less experienced in the big leagues. But Wal-Mart’s advantages were not inherent in its history or size. They grew out of a subtle shift in how to think about discount retailing. Tradition saw discounting as tied to urban densities, whereas Sam Walton saw a way to build efficiency by embedding each store in a network of computing and logistics. Today we call this supply-chain management, but in 1984 it was as an unexpected shift in viewpoint. And it had the impact of David’s slung stone.”

In 1984, this particular insight was worth a compounded average annual return of 28% for fifteen years.

For figures that hit you over the head with a baseball bat, no hunting ground is likely to be more fruitful than UnlistedStocks.net, curated by Nate Tobik. It's an excellent idea by a gifted analyst of small cap -- and oddball -- stocks.