An Update on Emeco Holdings

Some news from Emeco this evening/morning:

Emeco remains in full compliance with its current covenants. Amendments to the Gearing Ratio (Gross Debt: EBITDA) and Interest Cover Ratio (EBITDA: Net Interest) covenants were sought to provide the Company with additional flexibility and headroom and to provide balance sheet certainty while it pursues the debt reduction strategy in FY14.

Amendments will apply for the period to 30 June 2014 at which point the covenants will revert to current levels under the Bank Debt Facility. As previously announced to market, Emeco will not pay dividends or pursue other capital management initiatives prior to 30 June 2014, and has extended this commitment to providers of the Bank Debt Facility during the period to 30 June 2014.
Current and amended ratios are as follows:
1 - Rolling 12 month trailing Operating EBITDA
2 - Rolling 12 month trailing Net Interest Expense
3 - Amended Covenants apply to the USPP Notes

Other key terms of the Bank Debt Facility, including pricing, remain unchanged and Emeco retains full access to the Bank Debt Facility. Emeco did not incur any fees or charges from providers of the Bank Debt Facility in connection with the amendment.
Emeco is focused on reducing debt and continues to generate strong cash flow with net debt reducing by
$25m in the first quarter from $415m at 30 June 2013 to $390m at quarter end. Through the combination
of further cash flow generation, working capital release, asset disposals and lower capex, Emeco will deliver further reductions in debt through FY14.
Stephen Gobby, Chief Financial Officer, said "We have been pleased with the cash flow performance of the business this year despite the tough operating environment. Our focus remains on maintaining strong cash flow over the balance of FY14 in order to further reduce debt and ensure that the balance sheet of the Company remains robust."

An update and clarification of sorts. There's a post on this name at Alpha Vulture and the company has very recently guided between $90 and $105 million in EBITDA for FY 2014. Given that Chile and Canada account for $45 to $50 million of EBITDA, $90m in consolidated EBITDA means that Australian utilization rates have fallen off a cliff, to a third of 2012's figures and a sixth of 2011 figures.

Alright, so this is where margin of safety comes in to play.
--> Emeco needs to keep debt below 3.5x trailing consolidated EBITDA.
--> 90 million in EBITDA implies 40% to 45% utilization of its 813 machines
--> which means that it can sell off some of those machines
--> so the question is, at what discount to book it will offload them.

Here's a sensitivity table relating cash flows from operations, net disposals, and discounts to carrying value on the one hand, to Debt/EBITDA ratios on the other:

Can Emeco sell 2 machines a week at 40% discount to book? I think it can. And if it can, then you may consider that at the end of 2014 liquidation value will look like this:

That's why I'm long the stock. This is not Caterpillar. I should say that I'm a true believer at this point and I suspect that the conversation at Alpha Vulture would be more nuanced than anything I have to add.

Disclosure: I own shares in Emeco

It turns out that The Dolan Co. has been written up a number of times since I bought it so there's likely no reason to repeat what has been said here and here.

In brief, Dolan's a cross between The Daily Journal and Epiq Systems, but levered. It has mostly disposed of its unattractive operating units and is now in a position to generate somewhere between $23 and $25 million in free cash flow. There are covenant issues and management is in the process of negotiating these with its lenders.

Disclosure: I own a piece of DM

I'm out of DM. This development adds an element of risk that I'm not comfortable with. (I no longer feel as though I have grasped the entirety of the narrative; that's the worst kind of risk to take on). There are other, clearer opportunities with similar upsides. Next week's quarterly conference call should provide clarity on the company's plans for raising the $50m. 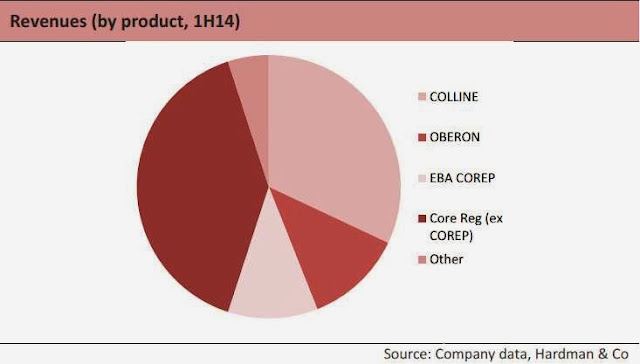 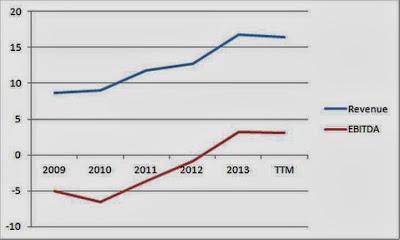 So now we have a clean set of updated numbers: 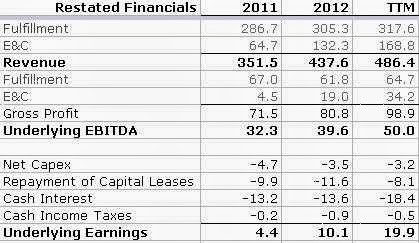 The company has generated positive FCF of 7 million in the TTM which may or may not reverse in the second half of the year: it may need 150 days of working capital in Q3 which would translate into an extra $7-1$10 million in additional cash required to fund the quarter, or it may have improved its cash conversion cycle so that the additional working capital requirement is negligible.

If it doesn't make it through to the next 10-K, the bankruptcy case may look something like this: 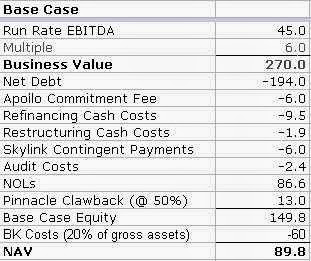 If it does make it through, then we're most likely looking at $20 million in cash earnings that grow over time -- through refinancing, debt paydown, organic growth, and a possible clawback.

This is an aggressive conservative investment and it's important to rely on your own research and intelligence rather than on my judgment.

Someone much smarter than I sent me a note that pointed out that (1) the value of the NOLs would likely be severely impaired in a BK because the company would have undergone a change of control, and (2) the EBITDA multiple envisaged for the enterprise might be too conservative because

(a) this is a line of work in which relationships and revenues are recurring and stable -- that is, attractive in its own right;

(b) competitors could strip out a great deal of the administrative costs in the event of a takeover; and

(b) rivals may vie not to let the other guy achieve scale on the cheap.

I've amended the base case scenario accordingly to show the range of possibilities:

I do still think that a BK filing is an improbable outcome. As my correspondent noted, the service disruption that may result -- customers not getting their DTV connected in the busy season -- may have prompted Unitek's customer(s) to prepay some of the accounts receivable to make that scenario less likely. That may be where the improved cash conversion came from.

In any case, as with most distressed situations, there's a lot to think about and hitting on the most plausible narrative is the main thing.
Posted by red. at 10:25 AM 10 comments: