Flybe is a UK-based regional airline. Its core business is flying short, thin, domestic routes – 280 miles on average; 40,000 to 60,000 passengers per year – that can support only one or two departures per day, if that.

These routes are expensive to operate and expensively priced. But they compete against coaches, trains, ferries, and self-driving, and therefore appeal to time-sensitive travelers – the businessperson who needs to get from Aberdeen to Belfast and back again before supper; the Durham University student who needs to get to a grandparent’s funeral in Cardiff or to a sister’s wedding in the New Forest; the working couple from Salford off for a B&B weekend in Devon. (In the summer season, of course, there’s plenty of trade and everyone’s load factors go up).

Profitability in a business like this requires a number of basic elements:

To cut a long story short, Flybe fell afoul of each of these principles. Half of its fleet consisted of regional jets that it couldn’t fill, that burned fuel at an alarming rate, that cost a great deal to own, and that tempted it into flying the longer, fatter routes flown by Easyjet and Ryanair. It employed 800 or so staff more than necessary, which is to say that two thirds of its non-crew personnel were excess. Its cost structure was so bloated that it felt the need to push its fares up even as its competitors’ fares, already much lower, were steadily falling. It outsourced nothing to speak of.

Its own house in disorder it entered into a joint venture with Finnair to run a Scandanavian regional airline operation that turned out – no surprise – to be both unprofitable and a cash drain. Its liabilities – debts, lease and purchase obligations, and so on -- amounted to £800 million. By 2013 Flybe was functionally insolvent.

Flybe’s then management attempted a first round of restructuring. At the end – not the beginning – of that exercise 89 of Flybe’s 158 routes, or 56%, did not cover their direct operating costs, i.e. the cost of the aircraft, crew, fuel and navigation. We have subsequently discovered that it cost less to ground the majority of its E195 regional jets at an annual cost of £26 million a year than to fly them.

Those are grim facts that contain within them the insight that the remaining 44% of routes, corresponding to the 78-seat turboprop aircraft flying lightly contested airport-pairs – the short thin routes I spoke of earlier – were profitable enough and steady enough to year in, year out bear most of the weight of both the distended fixed costs and the gross margin losses attributable to the unprofitable jets.

In any case, previous management had to go and they did. Equity needed to be raised and it was. Saad Hammad, a former Chief Commercial Office of easyJet and subsequently Managing Director of a private equity firm, was hired as chief executive.  He was promised a base salary in the £400,000 to £500,000 range and 3% to 4% of any improvement in Flybe’s market capitalization. There is no upper limit on that compensation package.

He, in turn, hired a new management team – some from easyJet, some not – and they have since set about stripping away the unprofitable routes, restructuring the fixed cost base, optimizing the route network, and investing in yields in order to reveal the underlying profitability and stability of the core business. . . . although it may not be immediately obvious from a quick glance at the company’s filings or presentations. The reconciliations to GAAP earnings look like this: 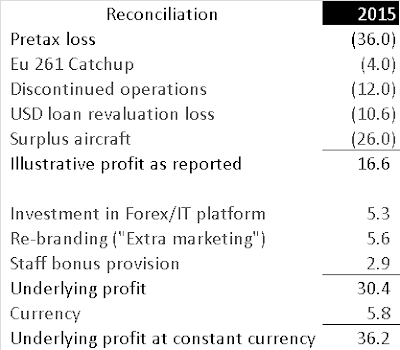 The implications for the financial statements are as follows: 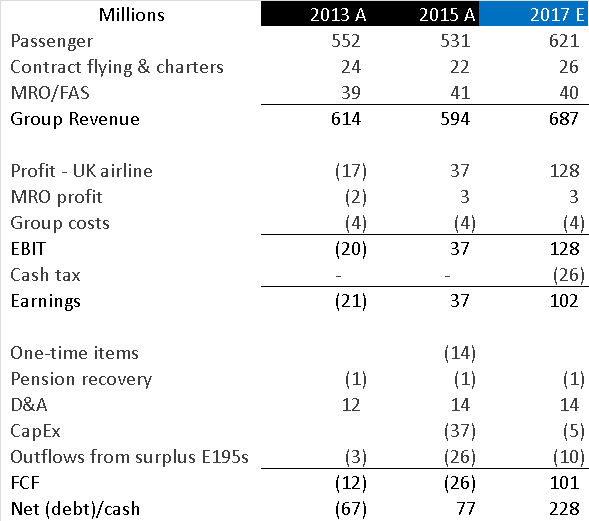 I'll pause here to note that, given Flybe's principal competition on its core routes is intermodal transportation, 2015 was a particularly challenging year. Its fuel hedging program is such that it is still pumping $1,000/MT fuel into its aircraft whereas coaches, ferries and private cars are using fuel that costs half as much. Flybe's cost disadvantage relative to these modes of transportation is/was therefore at its widest. The fuel hedges roll off in FY 2016/7.

The new management team have also substantially eliminated the £800 million in liabilities mentioned earlier. £40 million of the remainder are attributable to the rent and maintenance costs of the excess E195 jets: £20 million this fiscal year, £10 million next year, £6 million in 2016/7, £4 million after that, and nothing thereafter.

Beyond that, Flybe will take over the lease on 48 78-seat Q400 aircraft  from Republic Airlines. these airlines are ideal for Flybe's core routes and uneconomical for the distances that Republic typically flies. In any case, Hammad and his team have assessed that there are suitable airport-pairs (short, thin routes within the UK and also between such cross-channel city pairs as Birmingham-Brest) sufficient to absorb the 1.6 or so million seats that these extra aircraft imply.

The viability of Flybe's business model depends on the viability of the UK's regional airports. These airports exist only because of the financial support of individual local authorities and the central government. If that support withers the investment thesis fails.

The turnaround has not been all sweetness and light. The decision to enter the fray at London City Airport is, in my view, ill-judged. The hoped for potential of white label flying for European flag carriers has not and will probably never come to fruition. Individually these are immaterial matters. Together, however, they betray some potential signs of the weakness that has traditionally afflicted the Airlines' executive teams: the desire to strut on a grander stage.

Ultimately, I suspect that Flybe will be taken private by a private equity firm (or by a business like Torghatten that also owns Broderoe). The nature of its business means that, once the map of short, thin routes has been infilled there is no further profitable growth to be had and therefore no reason to be publicly listed.

In any case, net cash plus 12% FCF yield is, in my judgment, an attractive purchase price for the whole business once fully fixed. 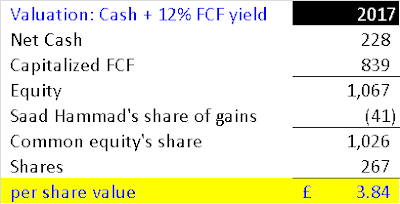 Why does this opprtunity exist?

Two or three reasons, I think, although one can never be sure what other people are thinking.

First, the analysts at the larger sell-side shops are  capitalizing the rental & maintenance expense of the excess E195 aircraft. So, when they last updated their views after the publication of the 2015 results, they calculated a liability of 7 x £26 = £182 million (or 8 x £26 = £208) instead of simply capping the liability of £80 million. As mentioned above the liability is, as of this week, capped at £40 million.

Second, Flybe's costs translated into the airline industry's standard measure of unit cost, cost per available seat kilometer, or "CASK", can cause observers -- even those who ought to know better -- to compare Flybe unfavourably to, say, easyJet. Something like this: Flybe's ex-fuel CASK is ~16p, easyJet's is ~3.6p and therefore Flybe is not "fit to compete".  Unmentioned is the fact that CASKs (and RASKs for that matter) rise exponentially, ski-slope like, at stage lengths less than 500 miles. Flybe's average stage length is 280 miles and there is no way yet devised to fly these stage lengths using European crews and paying European airport and navigation fees at CASKs below ~13 or 14p.

Third, it's both an airline and a turnaround.There a slew of adjustments in the 2015 results. Etc.


Disclosure: I own shares in Flybe 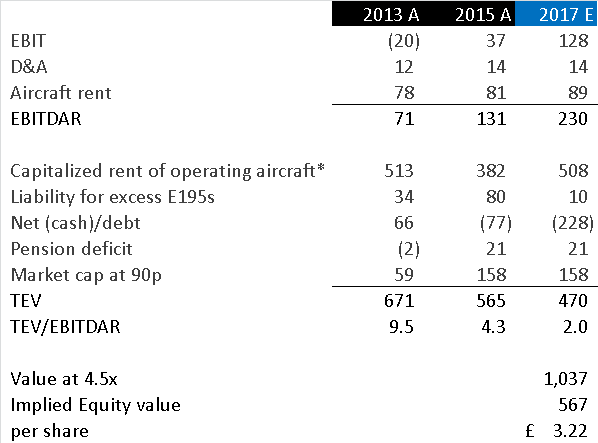