Texhong reported results last month and provided an update on its outlook. I'll attempt to summarize the state of play here.

I'll start with what I'll call its legacy business. What I wrote out in long  form here can be summarized via a wide angle view thus (apologies for the formatting):

There is a central tendency to margins and ROE despite the volatility in cotton prices because, put simply, Texhong operates under a cost-plus business model:

So it is not, I think, unfair to characterize the legacy business as follows:

Big picture: occasional volatility but the central tendency is 25% EPS growth (25% annualzed growth in book value at 20% ROE) with either a 30% or a 50% payout ratio, depending on what one thinks normal.  Texhong is the largest spandex yarn manufacturer but its market share is 4%; the runway is a long one. The company's stated ambition is 10 million spindles by 2020.


Prior to the earnings release the company announced a joint venture agreement between the company and its owner-managers for a 3 million spindle capacity plant in Xinjiang. The original release was free of detail but the post-earnings debrief with brokers revealed the following:


Xinjiang is the PRC's major cotton producing region and is majority Uighur. The desire to develop the hinterlands and to dampen ethnic unrest appears to have motivated this subsidy program.
We can model out the outcome of that arrangement as follows: 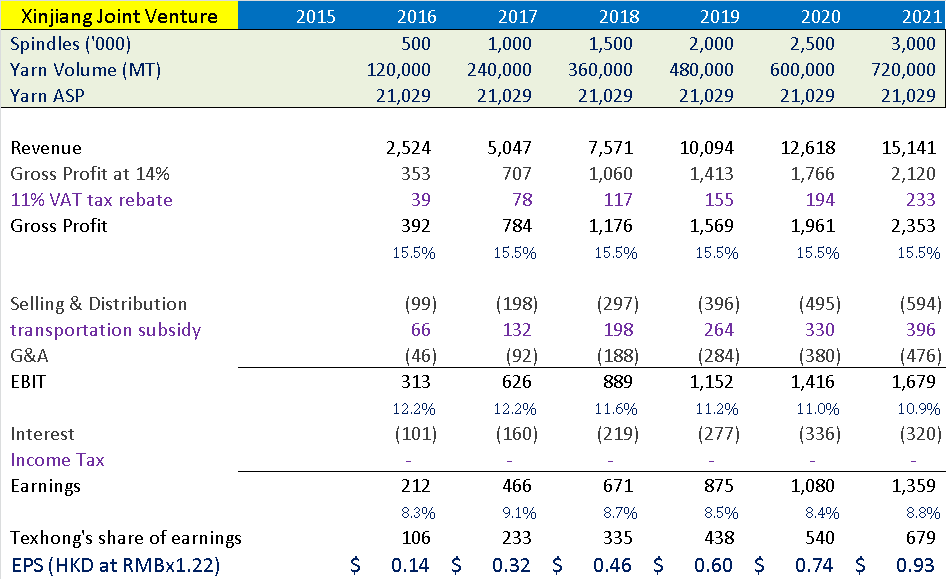 If this is approximately right, then we can sum the the earnings power of the legacy and Xinjiang businesses thus:

The company has estimated a payback period of 4 years on this project but did not specify whether to enterprise value or to Texhong's equity stake. If it is to the enterprise then the numbers above are in the ballpark as one would expect.

The company's other update on its plans concern its intent to enter into the downstream business -- organically or via JVs or acquisitions. This is a fuzzier ambition to model, obviously, but we can maybe arrive at rough guesstimates by

At a 14x earning multiple for the typical downstream textile business it could add value.

Pulling it all together

Lowish and base-caseish trajectories may look something like this:

This is not altogether out of line with Texhong's trailing ten year record. We'll know more as things play out but, for the moment, it looks to me as though the market is offering a >25% normalized earnings yield and therefore an >8% normalized dividend yield from the no-growth legacy business to keep one fed and watered in the waiting room.

edit: I have uploaded broker notes re: Xinjiang here

Disclosure: I own shares in this company.