Instem provides software applications to the early development drug and chemical R&D market. Its clients use these applications to collect, analyze and report complex scientific data; comply with regulatory reporting requirements; improve quality, consistency and efficiency of information reporting; and to reduce the time of critical path R&D activities.
Provantis
Its principal product is Provantis, a suites of modules for managing and recording Early Development Safety Assessment (EDSA)  studies, from receipt of the compound through to the automated assembly of statistical analyses and final reports, allowing scientists to collect, analyze and share data, whether at one central site or remotely. Provantis promises to make their work easier, faster, and less prone to error. Remote deployment of Provantis is made possible by secure centralized data centers in Shanghai and the US;  Instem has partners that maintain the system 24 hours a day, 365 days a year.

The EDSA market is a modestly-sized, and Instem has been, for more than ten years now, the market leading provider of information solutions for that market. Half of the world's pre-clinical drug safety data has been collected over the last 20 years via its software; it has over 9,500 users of its solutions and supplies over 130 customers, including sixteen of the world’s top twenty pharmaceutical and biopharmaceutical companies. It has two competitors – Xybion Medical Systems and Pathology Data Systems in the European and North American markets – but Instem’s user base is approximately double the size of these two combined.It has an average client relationship exceeding 10 years and a 95% customer retention rate. Approximately 65% of its  revenues are recurring.

In any case, Instem has also been increasing its penetration in the established Japanese market as well as in emerging other-Asian markets, particularly China. Instem reports that it won the overwhelming majority of new EDSA business placed worldwide in 2011 and that it has secured a record evel of new customers for Provantis. The most recent upgrade of the Provantis offering, in 2012, places Instem in a position to capture an even greater share of the EDSA market and to expand into other, closely related, markets such as safety pharmacology studies, drug metabolism and pharmacokinetics studies.

Centrus
Its other main product line is Centrus,  an application which grabs legacy scientific research data, transforms it into an easy-to-use format, facilitates communication between the "discovery" & "clinical" functions in a drug development value-chain; and produces SEND datasets in a few simple steps (SEND is the regulatory standard for the transmission of research data). The Centrus offering was strengthened in 2011 by Instem's acquisition of  BioWisdom, an app for extracting intelligence from R&D related healthcare data. As it stands, Centrus is like CRM software, only for raw scientific data. 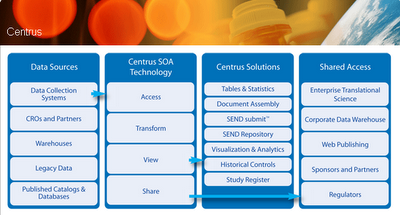 Centrus is making its market -- there were no competing products when it was launched some 5 years or so ago,  and there are none today. Instem "spotted a gap in the market", as Alan Sugar would say, and they have developed the product and the market from scratch.

In any case, one can, from the above, more or less divine what the numbers are going to look like: 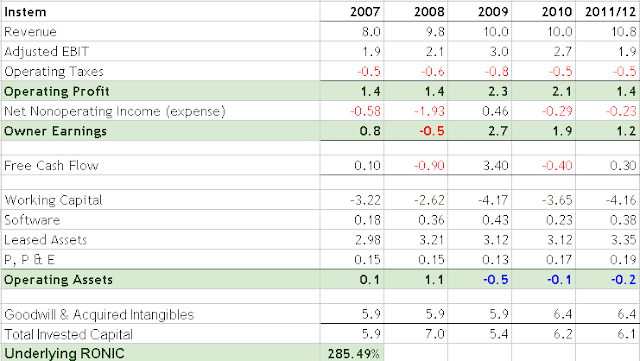 As laboratory working practices change -- the growing prominence of multi-site working and outsourcing to contract research organizations and so on, as well as the adoption of new standards – Provantis and Centrus are likely to benefit.

Instem is a good business with a 7% CAGR since its AIM listing. It shouldn't be yielding 15%. Still, there is some cyclicality to this business, especially in the awarding of new business, and a conservative 9% hurdle rate is probably called for, easily placing the value of its shares at more than 2x the current price.

PS: The trick to valuing this stock is to normalize properly. It is a cyclical business, so taking the average NOPAT margin of 17.84% and applying it to this year's revenue will come close to specifying the current earning capacity of the business, £1.93 million. Discounting at 9% (or applying an 11x multiple) gets you to a no growth earning power value of £21.39  million. Screens can't easily capture this: to them it looks like Instem is currently trading at 11x earnings, as it should be.