FreightCarAmerica (“RAIL”) makes and sells 80% of the coal cars in the United States. Its customers are railways, power companies, and leasing firms.

RAIL has a couple of competitive strengths:

The business has generated an average of ~$34 million per year in operating profit on average operating assets of $96 million, for an average return on invested capital of 35% -- a fair reflection of its competitive position

The story in railcar units:

At an average selling price $75,000 and an average gross margin of 11.75%, this recurring, though lumpy, business of replacing old coal cars has generated $590 million in gross profit since 2005.

The coming business cycle calls for approx. 79,000 coal cars – those aged 30 or more years old today – to be replaced. Moreover, the coal cars to be replaced are made of steel and need to be exchanged for the more efficient aluminum cars which are RAIL’s specialty. The average replacement rate, therefore, is going to be comparable to the past eight years: 9,875 cars per year, perhaps 85% of which will be supplied by RAIL at an average price of $80,000 per unit.

After overhead expenses and taxes (net of the NOL carryforward), the average annual operating profit from this core business is therefore going to approximate $36 million a year.

In order, it says, to smooth revenues across the business cycle, RAIL entered into the railcar leasing business in 2008. Setting aside the long-term wisdom of competing with its customers, the minimum revenue schedule over the next few years from this segment is knowable – about $5 million per year.

RAIL has also, via acquisitions, strengthened its commitment to providing railcar maintenance services in the busiest rail traffic corridors in the US. We can expect this segment to contribute another $4 million per year in after-tax profit.

RAIL’s total minimum earning capacity over the next business cycle, is therefore, about $45 million per year ($3.78 per share). Bearing in mind that RAIL pays out what it doesn’t reinvest for growth, we can project that, in the absence of the an incident like the closing of the Johnstown plant, it will pay out its excess cash and at least 75% of its operating profit, for an average of $3.10 per share per year, which is not bad for a stock priced at $18 and change. 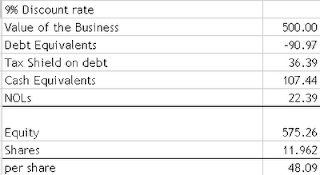 It's a wildly cyclical stock, so everyone tries to time it. Some brokers even have a sell rating on it. The only real risk with this stock -- the only one that I can see --  is that it might be acquired at $25 or so by an outfit like Berkshire. The concerns over the near-term death of coal are founded more on hope than fact.

Edited for typos on Oct 19th