Mayur Uniquoters (“Mayur”) is an Indian manufacturer of (PU and PVC) synthetic leather.

Leather itself, however, is expensive, in short supply, pollutive, and in any case subject to some ambivalence in a majority Hindu country. If one has been to India, however, one knows that there’s nevertheless plenty of leather about. It is only recently that synthetic (polyurethane) leather has been able to mimic the real thing well enough to have gained acceptance as a substitute for it in the range of consumer products listed above.

The synthetic leather industry in India is, as one would expect, largely fragmented. The so-called “informal” sector accounts for half the market and the “formal” sector consists principally of Jasch Industries, Fenoplast, Manish Vinyl, V.K. Polycoats, HR Polycoats, Polynova Industries, and Mayur itself.  Jasch and Fenoplast are listed; V.K, HR, and Polynova are private, and Mayur is by some distance the largest of them all.

This is how the listed companies compare:

It is not hard to see, then, why Mayur has done well over the years. It makes more synthetic leather, faster and cheaper than its competitors. It can undercut them on price and it can deliver in greater quantities. It has the broadest client vase, the lowest cost of capital, and the cleanest balance sheet, and is therefore positioned as the most reliable supplier to the major consumer goods manufacturers up the value chain.

Once Mayur had reached a tipping point (in 2008-2009 as it happens), it was always going to take yet more market share.

No wonder, then, that Mayur’s last ten years of performance look like this. 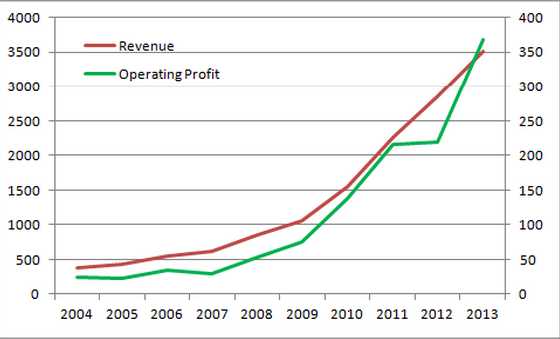 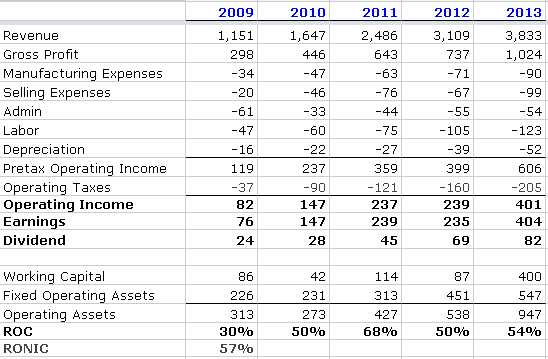 Figures are in nominal rupees. 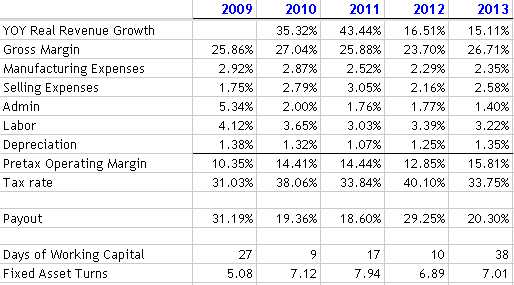 As it stands today, half of Mayur’s revenues are attributable to footwear. The Indian footwear industry is the world’s second largest and the Indian footwear market is the world’s third largest. The “formal” sector accounts for nearly 25% of the domestic market and consists of a handful of large players – Bata India, Relaxo Footwears, Liberty Shoes, Action, Paragon Footwear, and the VKC Group (all of which are Mayur customers and the first three of which are listed).

Let's focus on Bata because it is the largest, because its production is entirely directed toward domestic consumption, and because it sources 75% of its synthetic leather from Mayur. 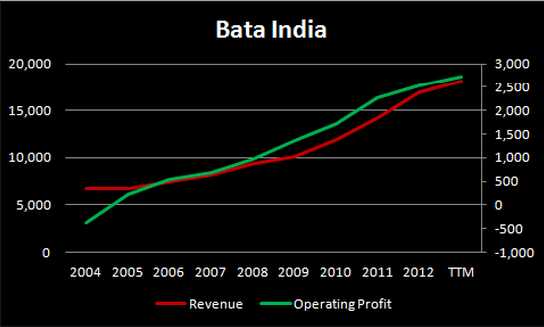 Bata India trades at 35x earnings on the sensible assumptions that (a) the formal footwear industry will increasingly displace the informal manufacturing sector; (b) India's economic growth rate over the next twenty years will exceed that of the mature economies; and (3) Bata's competitive position (branding, experience, distribution network) will see it share in this bounty.

Motor vehicles of one kind or another -- scooters, passenger cars, SUVs, tractors -- contributed to 35% of Mayur's 2013 revenue. It is the number #1 (and very occasionally #2) supplier of artificial leather to each of the above. It is likely that there will be more motor vehicles in India ten years from now and that Mayur will profitably capture a healthy share of that growth. This year and next it will add GM, Mercedes and BMW to its roster of significant customers, thereby venturing further into the global market.

The last two years has seen Mayur investing in capacity to address this future demand. It has increased its production capacity, of course, but it has also taken steps toward backward integration, allowing it to control the availability of good quality knitten fabric (from which artificial leather is manufactured), thereby reducing the rejections rate and increasing gross margins.

Mayur pays out every rupee of earnings not reinvested for growth, and its growth investments are repaid within two years. It is 75% family- and insider-owned and has always treated minority shareholders fairly.

One doesn't have to rely on the consensus projections of 20% per year growth in Indian artificial leather demand to suspect that Mayur is good value at a 10% enterprise yield.

This is a high conviction, long-term position and I've sized it accordingly.

Disclosure: I own this one.

(November 17th 2013. Note: I started drafting this at the end of August. The share price has advanced a little since then. It wouldn't be out of the question that the taper, whenever it comes, could provide a (perhaps much) more attractive entry point. The headache is in setting up a brokerage account in India and how to do that is googleable).
Posted by red. at 10:36 AM