The problem with dumpster diving is that one is occasionally faced with having to work in the service of one’s capital. Break out the pencil, fill in the missing information, do some sums, and make a decision. Grubby stuff, far removed from the more patrician activity of investing in high quality issues.

Still, I asked for it by taking a position in Cybergun, so here goes.

At the beginning of the calendar year, Cybergun was a fast-growing business, generating an average return of 13% on its net operating assets and 44% on its incremental investments. It buys the right to use brand identities from all major gun manufacturers and makes its money from converting those brand licenses into replica weapons that it sells on to the consumer market. A 3% spread between returns and investment, therefore, is a quite reasonable estimate of its economic worth; and, since licenses are fixed and sunk costs, it makes some sense that increased sales should generate higher incremental returns.

So, valuing Cybergun at (13% ROIC / 10% Cost of Capital) x Net Operating Assets of € 54 Million, giving it no credit for future growth, and subtracting net debt, sums to a lowball equity intrinsic value of €8 per share. And indeed, at the beginning of the year, that’s where Cybergun’s shares were trading.

Since then, Cybergun’s share price has fallen by 85%, which would seem to suggest that either the initial valuation was wrong or that something has changed over the course of the year.

I am confident that the initial analysis wasn’t wrong. There are, nevertheless, some things to think about:

Gross Margin compression: The gross margin that the analysts following Cybergun use to model their estimates and valuations is 40%. In fact, Cybergun’s gross margin has varied between 38.1% and 48.8% in the period 2003 to 2010. So, their idea is that Cybergun’s baseline gross margin is 40% with anything above that as a bonus. So, when gross margin fell to 34% in the year ending March 2012, it triggered a wave of downgrades and, presumably, sell orders.

Liquidity: A 34% gross margin is unsustainable. At that level, Cybergun’s ability to cover its interest charge is called into question.

Dividend: Cybergun is accustomed to paying out a dividend at the half-year mark – that is, at the end of September. The dividend is usually in the order of 50 cents per share, which would have yielded, at the Sept 2012 stock price, 20%. For the above reasons, it opted not to pay a dividend this year. That decision accelerated the sell orders.

Year-on-Year fall in revenue: H1 2012 sales (in the period ending Sept 2012) fell by 12% over H1 2011 sales. Since Cybergun is a growth story – actual long-term growth has exceeded management’s long-term growth guidance of 20% CAGR – a fall in sales now, when it had powered through the 2008-2010 period unaffected, looks ominous.

Between March 2011 and March 2012, China’s CPI inflation rate was running at 6.5% which likely approximates the increase in input costs facing Cybergun. The company was likely to have passed on almost half of this inflation, absorbing 3.5% in reduced gross margin. By contrast, in the period September 2011 to September 2012, China CPI rose at 1.8%, so we should see TTM gross margin expand back to its normal 40% level.

At a ~40% gross margin and €79.5m revenue, we’re looking at €2.44 million in cash from operations before changes in working capital. The company tells us that it has worked down its inventory by €4.9 million in the TTM, so operating cash flow, after taxes, interest and reduction in working capital, should be in the region of €7.3 million. After €3 million in previously committed capex, TTM free cash flow should be €4.3 million. (The company tells us in its latest quarterly statement that there will be a pause in growth capex as it uses cash flow to pay down debt). So dividend and interest cover are not – if I’ve done my sums right – an issue: Cybergun should be in a better financial position today than it was a year ago, when its shares were trading at €11.

Between H1 2010 and H1 2011, revenue (in dollar terms) grew by 45%, far above the long term trend. It was inevitable that H1 2012 would suffer in absolute terms as distributors’ inventory was worked down to normal levels. There is nothing to suggest that the long term trendline of 20% growth has been broken. 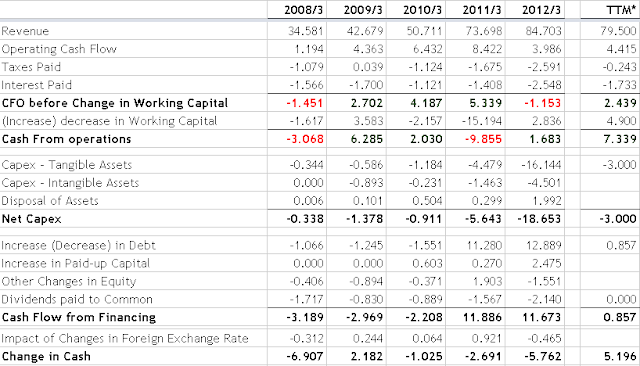 Note: As should be plain from the discussion above, the TTM figures are of my own devising. I have pieced together the information provided by the company re: revenue, inventory levels, capex and net debt to piece together a complete cash flow schedule that it doesn't provide.

Geoff Gannon sensibly advises that one should relive one’s experience of buying the stock rather than one’s experience of owning it. This has been my attempt to do just that. I feel no differently toward Cybergun than I did 5 weeks ago. It’s worth €8 to €12. Or so I say. Time will tell.

Disclosure: I have a position in Cybergun and may double or triple it at prices below €1.20
Posted by red. at 1:49 PM