I like businesses that acquire other high return on capital firms at low valuations, thereby compounding their returns. If the acquired businesses are small, uncontroversial, and beneficiaries of long-term secular trends, it is a strategy that mirrors my own approach to investment in shares of publicly traded businesses -- and therefore a business model that I can easily understand and appreciate.

That’s one reason why I gravitate toward businesses like Northbridge Industrial Services (“Northbridge”),  an acquirer and consolidator of businesses that supply specialist equipment, primarily to the oil and gas industry.

(XPO Logisitics and Judges Scientific, already profiled, are other examples; a similar business, and one that I covet most is Australian, but not yet cheap enough -- especially in USD -- to profile).

In any case, Northbridge’s foundation is Crestich, which claims to be the world’s largest load bank manufacturer and supplier – via lease and purchase. Northbridge acquired Crestich’s principal competitor in the London area – Loadbank Hire Services – in March 2007, a year after its IPO, and acquired Crestich’s principal distributor to the Caspian oil & gas industry – RDS Ltd. – six months later.

Its subsequent strategic moves have sought to expand its geographic and sector footprint: Tyne Technical Equipment Services was established in 2009 to rent and sell generators and associated services in the United Arab Emirates; Tasman Oil Tools Ltd., a thirty year old oil and gas equipment rental business in Western Australia was acquired in 2010; Allied Industrial Resources was set up in mid-2009 in order to supply high power air compressors and dryers to the oil & gas, shipbuilding, construction, and mining industries.

This is what Northbridge looked like at the end of 2011: 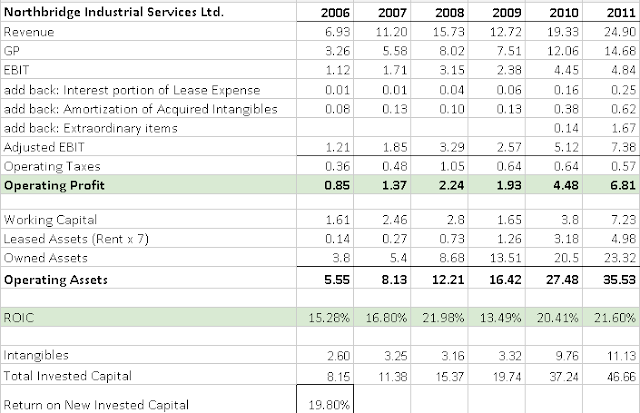 Its value, as-is, with no further growth and a cost of capital of 9% is probably in the neighborhood of 458p, 86% above the current price:

The future portends more value-added growth: Northbridge intends to expand into the continental European, US, Brazilian, Chinese, and Singaporean markets.

Its acquisitions in December 2011 – of the Belgian transformer and switchgear leasing firm DSG Rental NV, and the Singaporean oilfield instrumentation business Loadcell Services – are steps in this direction.

Obviously, these latter acquisitions made no meaningful contribution to Northbridge's profit in 2011: had they been acquired in January, however, they would have contributed 0.99 million in after-tax profit, and 2011 ROIC would have been 24%, raising Northbridge's earning power value by 50p per share.

Northbridge is yielding 14.2%, just another quality British business selling at a distressed price. It reports interims on September 27th.