Hawaiian Holdings, owner of Hawaiian Airlines (Hawaiian), is in the business of transporting people and cargo to, from, and between the Hawaiian Islands.

An investment in Hawaiian, therefore, can only be premised on the belief that Hawaiian is – and will remain – the lowest cost airline in its market, a proposition that the remainder of this post will defend.

“Economies of scale” exist when indivisible costs are an important share of total cost, and when the assets represented by those indivisible costs are specific to the market in which the business operates – an increased volume of business will reduce average cost. It doesn’t exist when they’re not. The concept of economies of scale is not so much about size as it is about density – a better term would be “economies of concentration”.

In the airline business, indivisible costs are those that do not change when new routes are added.  In Hawaiian’s case, those costs are gates, terminals, and runways in Hawaii; management and other overhead expense; and the infrastructure for aircraft maintenance, also in Hawaii.

No other airline has such a concentration of fixed costs in Hawaii. Hawaiian has 47% market share – they call it “seat share” in the airline business – in and out of Honolulu and Kahului; by contrast, the next largest competitors, JAL and United have ~7.5% seat share each.

The effect is even more pronounced in inter-island flights, in which Hawaiian has 87% seat share.

Every additional flight, wherever the provenance or destination, has at least one leg in Hawaii, and therefore reduces Hawaiian’s fixed costs per unit – and average cost per unit – even further. 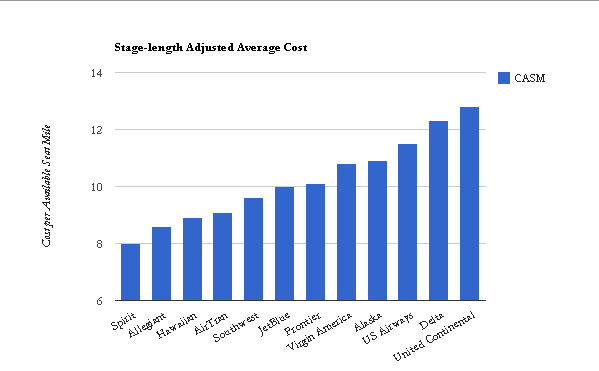 Hawaiian's competitive position appears even better when viewed from the perspective of the interplay between the three distinct markets in which it operates. 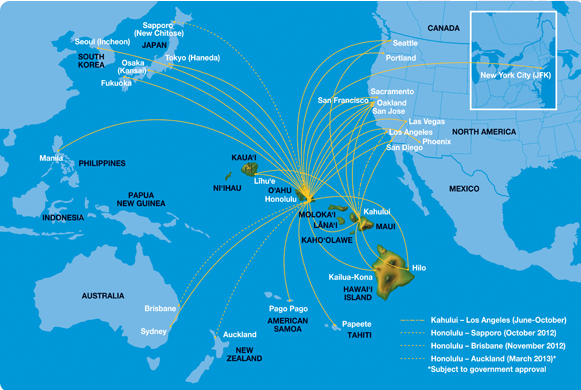 The Interisland market is Hawaiian's stronghold. Demand largely consists of business travelers, on the one hand, and transfer passengers from outside Hawaii, on the other. Virtually every airline that ferries passengers to Hawaii feeds their traffic automatically into Hawaiian's interisland route network. They don't really have a choice.  Demand in this segment is therefore is inelastic, and when inelasticity in demand meets monopoly in supply, it is reasonable to suppose that economic profits are in the offing.

The West Coast segment is Hawaiian's firewall: it is surely  the most contested airline market in the United States. There is no fat in the fares on these routes and Hawaiian flies them at cost, earning a slight premium only in those few city-pairs where it has dominant market share. If Hawaiian is flying these routes at cost, it must be true that other airlines are operating them at a loss. It can be in no-one's interest to lower prices even further, and so prices in this segment have remained relatively stable.

Although this West Coast segment earns no economic profit, it nevertheless serves Hawaiian's strategic purposes in two ways:  first, it ensures that no other airline has an economic interest in establishing a substantial beachhead in Hawaii; and second, the low West Coast fares feed high numbers of passengers into Hawaiian's profitable interisland segment.

These two segments, then, are interdependent: West Coast erects the barriers to entry and allows Interisland to profit; Interisland puts the fixed assets to heavy use and allows West Coast to be an effective barrier to entry. This interdependence coheres so well that it might even constitute a business model.


An ancillary benefit is that Hawaiian, facing an inelastic demand curve in its interisland market, is able to pass on increased fuel costs without discomfort, thereby improving its cost leadership in the West Coast market. 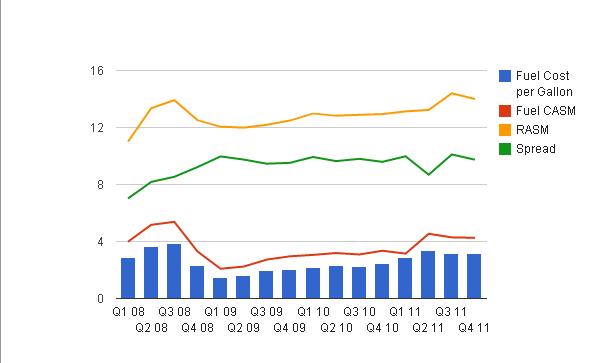 This has been the happy balance since 2008, when Aloha Airlines, the other Hawaiian airline, fell into bankruptcy,  liquidated, and saw its 30% market share immediately assumed by its old rival.


Hawaiian's financial performance in this period is a hymn to the blessings of muted rivalry:

and, from the perspective of owner earnings:

Hawaiian's management, recognizing that this yogic balance between the West Coast and Interisland markets represents a solid foundation, is in the process of assembling a high yield, high demand international segment -- Japan and Korea, in particular, but also Australia and New Zealand -- to lay on top. 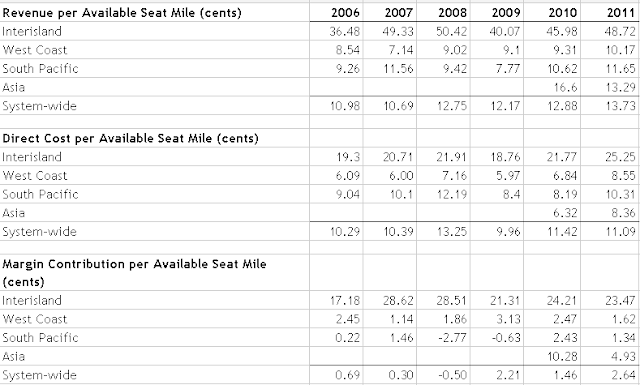 Source: my calculations from US DOT data


At an average margin contribution of eight cents per available seat mile, the additional 3.3 billion seat miles in capacity can be expected to contribute at least $100 million in additional annual after tax profit, or approximately $2 per share.


Turning now to the matter of valuation. Hawaiian's Interisland and West Coast markets -- the base -- can be counted on for $161 million in annual normalized operating profit: an average return of 11.5% on installed operating assets of $1,398 million. These two segments alone value Hawaiian's equity at $854 million, or $16.84 per share. (I have used an 11% cost of capital, even though Hawaiian's pretax cost of debt is 5.15%, because, let's face it, it's an airline).

If the international segment can be relied on for an additional $100 million in operating profit, and I think that is a low estimate, then the equity is worth $19 per share. This valuation implies a multiple of less than 4x on forward owner earnings which, even for an airline, is conservative.


Disclosure: I have a position in Hawaiian.
Posted by red. at 5:49 AM