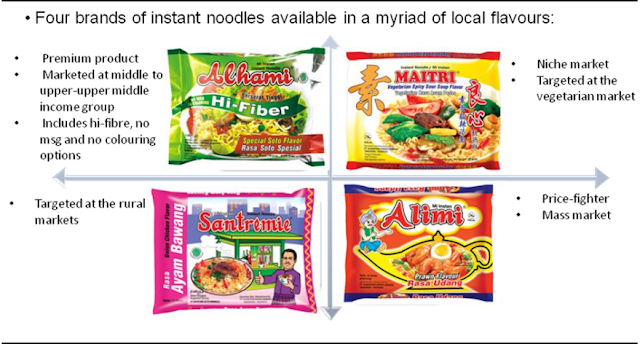 Its sales in Aceh and North Sumatra account for half of its revenues and its market share in these two northernmost provinces of Sumatra exceeds 50%. In Sumatra overall, its market share is 30%. (At 50 million, Sumatra is as populous as England and more populous than California). 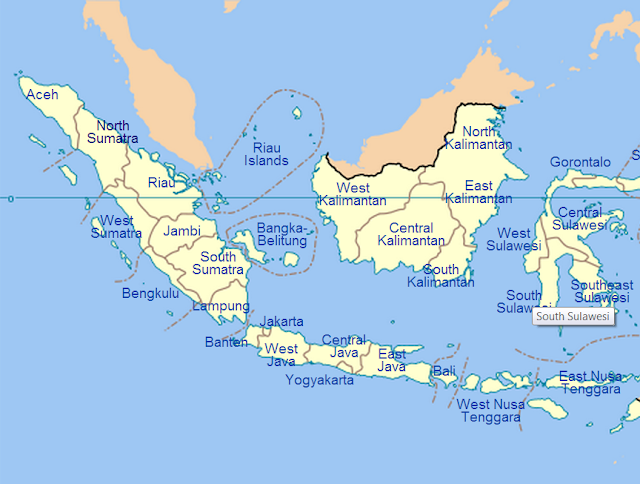 Which is nice because instant noodles are an Indonesian staple: its population consumes more of it per person than any people but the Koreans. (As a point of comparison, Americans eat 46 slices of pizza per person per year). 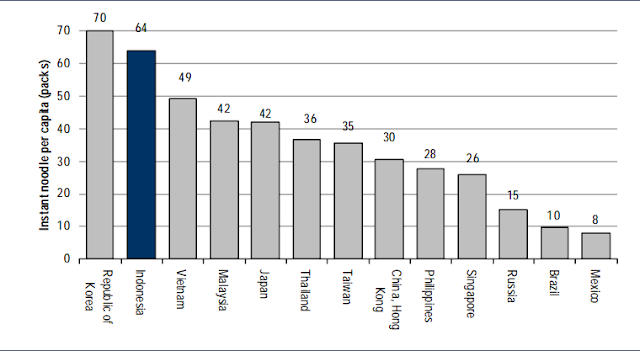 Whereas CSF's position in Sumatra (and Northern Sumatra, especially) is strong, it is nevertheless a midget in the overall Indonesian instant noodle marketplace:  it operates in the shadow of the two giants of the instant noodle business in the country – Indofood CBP Sukses Makmur and Wingsfood – whose market shares in Indonesia overall are ~75% and 15% respectively

Indofood CPB’s “Indomie” brand, in particular, is so popular that “Indomie” is synonymous with "instant noodles" in much of the country. In the diagram below, pulled from an analyst report on Indofood CBP, “Alhami”, CSF’s principal brand and accounting for half its sales, doesn’t even merit a mention. (CSF’s national market share is, in fact, 4.5%). 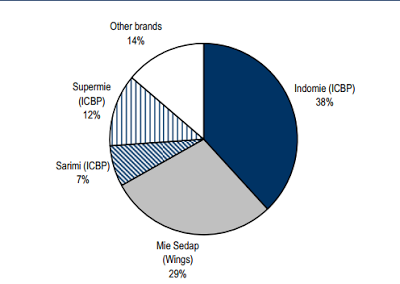 At first glance, this situation looks ominous: what chance does CSF have in defending its market share against a goliath like Indofood CBP and at what cost? And yet, the history of the instant noodle market in Indonesia points to an altogether more optimistic outlook for CSF.


Indofood’s market share in 1999 was actually 20% higher than it is today. You need wheat flour to make instant noodles, and Indofood had a lock on wheat flour imports and wheat flour milling; no wheat flour for anyone else, no competition. Deregulation in the aftermath of the “Asian crisis” of that period, however, meant the end for Indofood’s control of wheat flour and this, in turn, allowed other firms to contest the instant noodle market. 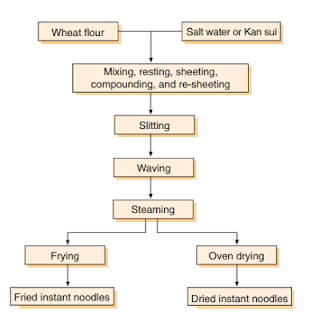 No wheat flour, no noodles.

Now, it seems to me that there are two very different ways to enter the market. The first way, available to deep-pocketed entrants, is to launch in Java and wage a very expensive price war with Indofood, imposing serious losses on Indofood and oneself, taking market share, and then calling a truce. This is the approach that Wings Group took and the four year (2004-2008) price war between Indofood’s “Indomie” and Wings Group’s “Mie Sedaap” – a Javanese cockfight, if you like – is a celebrated episode in recent Indonesian business history. The unofficial terms of the truce? Indofoods sets the prices and Wings Food matches it. It's been that way since late 2008.

The other way, of course, is to focus on a niche: pick your geography and demographic; develop, test, market, and launch products for that demographic; build a dense distribution system (Makro, Carrefour and Hypermart; mini-marts, wet markets, and neighborhood grocery stores); and let local economies of scale and brand habit do the rest

An analyst checking out the Carrefour in Median: the shelf space occupied by Alhami was 60 to 70 meters across.

CSF’s instant noodle offerings are positioned as healthy and certified halal (hence “Consciencefood”), and are flavored to correspond to the range of popular north Sumatran dishes. In addition, all of its fixed costs – the production lines, the warehouses, the trucks, the TV/radio/promotional spending – are all concentrated on sales within a 300 km radius of Medan. 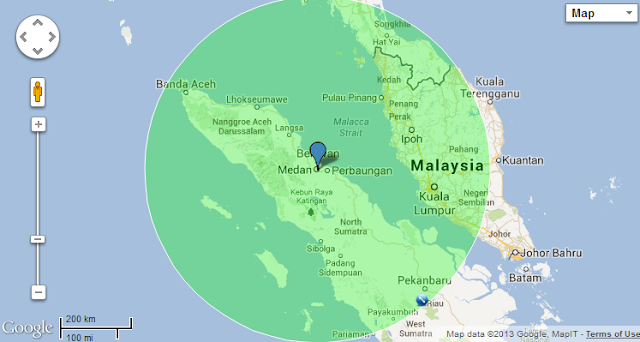 This latter approach, therefore, takes market share without imposing losses on oneself since one’s average unit cost is lower than Indofood’s. In fact, one can price the noodles at 10% below Indofoods and make a fatter profit. 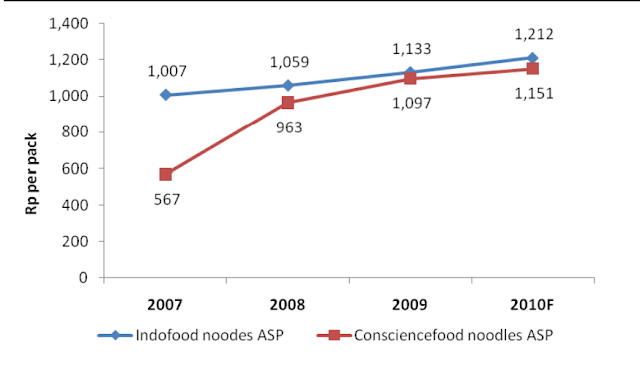 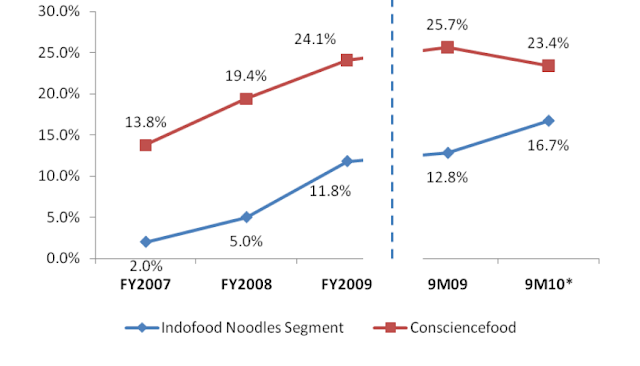 To see why, one can run the numbers in full or one can take a shortcut. Consider the box of 40 packs of noodles pictured above. That box of instant noodles retails for about ~US$5.50 in local currency. How many boxes fit in a truck that can navigate Indonesian roads? How much would it cost for a truck to transport those boxes from Java to Medan and back? Multiply that problem by a 25 million boxes a year and one can appreciate the scale of the problem. 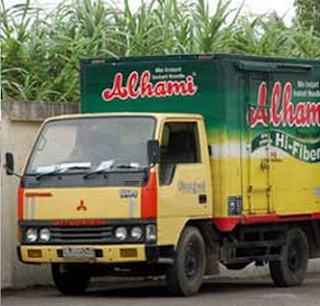 Local scale is important enough that the retail price of imported (Japanese, Korean, etc) brands of instant noodles is 10x to 30x that of Alhami, CSF’s premium product.

Between 1999 and 2010, then, CSF had taken more than half the north Sumatran market away from Indofood, was growing at 18.6% a year, had maxed out its production capacity and, in order to extend its reach into Java, had hired a third party manufacturer to make its noodles in Jakarta.

At the same time, it had big plans for the future: it wanted to take control of manufacturing in Java; and it wanted to leverage its brand by entering the markets for cup noodles and health drinks. Cup noodles and soft drinks sell for 5x and 3x the price of a pack of instant noodles so the margin prospects are that much more attractive.

So CSF went public in 2010, with the owner-operator Djoesianto Law selling ~45% of his stake.

Let’s pause here for a moment and consider the value of CSF’s instant noodle business.

Note: The marketing, distribution and G&A expenses are unallocated. Total corporate marketing expense in 2012 was 32.6 billion Rupiah, an 83% increase over 2011: this increase in very large part represents groundwork for the launch of CSF’s line of cup noodles and soft drinks in 2013. 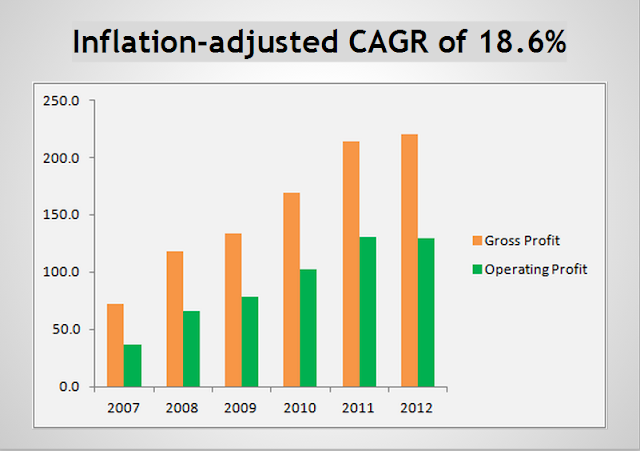 Instant noodles are a cheap, fast, convenient alternative to rice. Consider Indonesia's long term per capita GDP growth rate (6%), its rate of urbanization (44%, growing at 1.7% per year), and the participation of women in its labor force (51%). Next, consider Medan's relative proximity to Kuala Lumpur and the cultural affinities between Indonesian Malays and Malaysians. Now, what's the correct multiple for this business? I'd feel lucky to buy the whole business at 8x earnings.

Now consider how the market is pricing it: 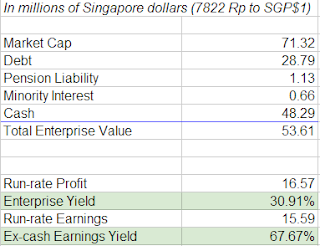 A P/E of less than 1.5x for a growing, branded consumer staple with some moat-like properties? What’s going on? I’ll turn to that in my next post.


Disclosure: I am long Consciencefood Holdings.
Posted by red. at 4:46 PM